Having trouble sleeping? A Blair psychology teacher and student weigh in

With so many outside commitments, high schoolers are finding it difficult to get a healthy amount of shut-eye

All high schoolers know the struggle of grinding through an exhausting school day after not getting enough sleep the night before. It’s almost impossible to concentrate, let alone absorb all of the information the teacher is saying. Being productive is out of the question. Sleep is as necessary to sustaining life as is food and water. The amount of sleep you get dictates so much about the following day, your physical health, and your mental health. 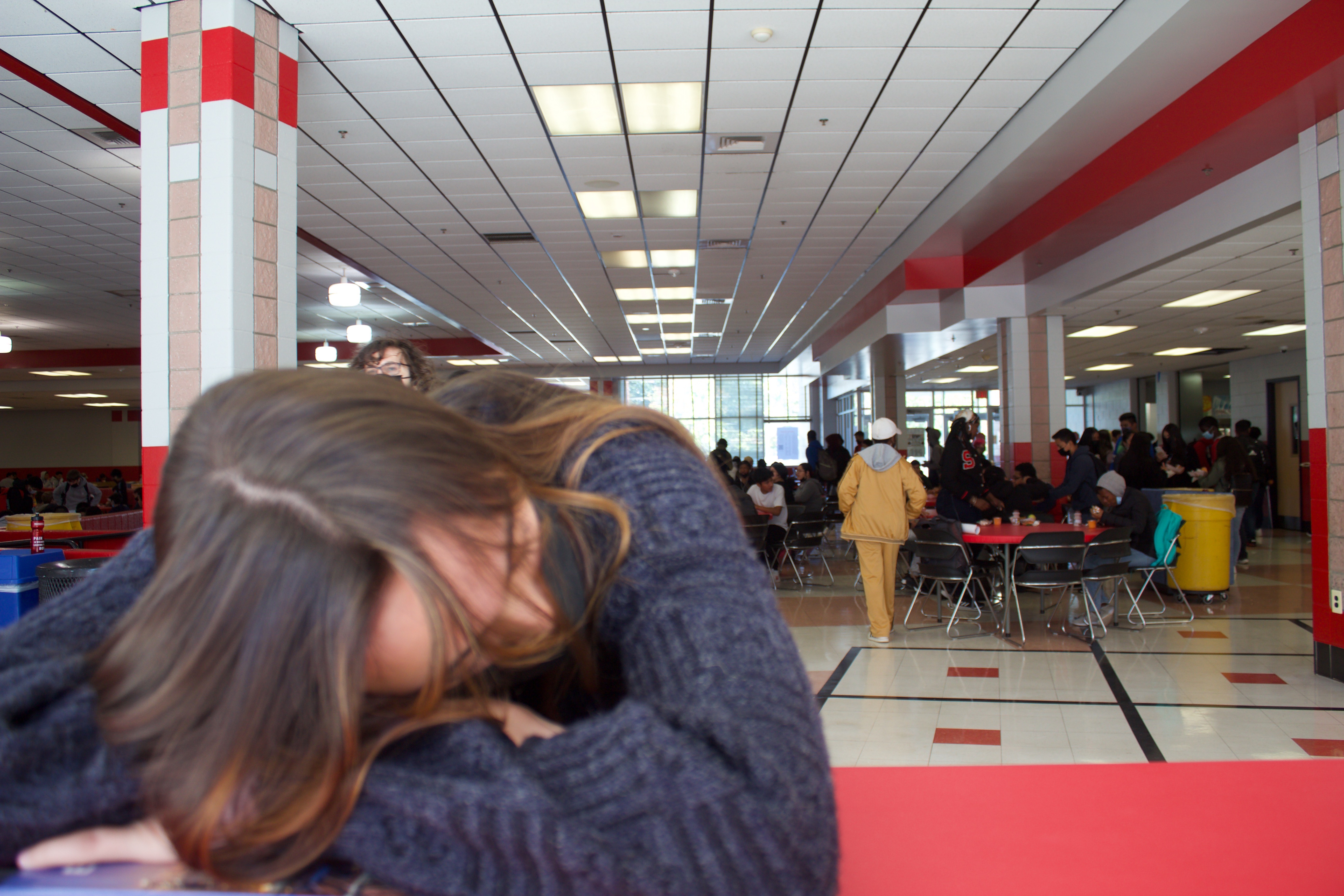 Photo: Blazers are having to balance a reasonable amount of sleep with homework and other activities.

Photo: Blazers are having to balance a reasonable amount of sleep with homework and other activities. Photo courtesy of Gigi Segal.

And especially now, sleep can be hard to find. Adriana Burgos-Ojeda, an administrator and vice principal at Blair, believes that the pandemic and online school has made it more difficult to get a healthy amount of sleep. “The biggest thing that I’m noticing this year specifically is that we used to be starting at 9:00 and now we’re starting at 7:45, so it seems like some people forgot how to do that. The thing that happens most often is that folks might be staying up too late and not getting enough sleep,” she says.

According to the Nationwide Children’s Hospital, being tired decreases your cognitive ability. Your cognitive ability is an umbrella word for “attention, memory, decision making, reaction time, and creativity.” This explains why it is so difficult to get through a school day on little sleep.

And being exhausted makes you irritable. According to VeryWell Mind, “Poor sleep can make it much more difficult to cope with even relatively minor stress. Daily hassles can turn into major sources of frustration. You might find yourself feeling frazzled, short-tempered, and frustrated by everyday annoyances.” This is one of the reasons why poor sleep has been shown to be a detriment to mental health.

Sleep also affects your physical health and athletic performance. According to a paper written by Andrew Watson, a sports doctor at the University of Wisconsin medical school, “previous studies in team sports have demonstrated that competitive success in competition is related to increased sleep duration and quality.” He goes on to say that sleep is when your body heals from injuries and repairs muscles after exercise.

The amount of sleep one should get is determined by their age. As a teenager ages, their sleep schedules are biologically delayed by about two hours. This means that a student that once typically went to bed at 9 p.m. would now fall asleep around 11.

So how can you improve your sleep?

Nicholas Losekamp, a psychology teacher at Blair says that having a specific schedule of when you go to sleep and wake up every day helps. “Have a specified time to go to bed and wake up each morning. Having that regular routine… helps you fall asleep quicker,” he says.

Johns Hopkins Medicine suggests that a short nap after school would make you better-rested: “tired teens may benefit from a 30- to 45-minute nap before dinner. This is a better fix for sleep deprivation in teens than sleeping-in, which throws off their body’s sleep cycle.”

Losekamp also insists that his biggest recommendation to someone looking to get more sleep is to stay off devices for as much time before you go to bed as possible. “The actual light from the device actually makes it harder to fall asleep right away. I’d recommend reading a book or something for the half hour to an hour before bed,” he says.

Sophomore Cyrilla Truong says that her phone is the main reason why she loses sleep. “Even if a lot of people hate to admit it, phones play a big role in our mental health both positively and mentally... My phone for sure keeps me a lot awake at night,” Truong says. She says that she typically gets around 6 hours of sleep every night.

In 2017, MCPS actually pushed back high school start times by 20 minutes, moving it from 7:25 a.m. to 7:45 (where it currently stands). But this causes major logistical issues, like the fact that elementary and middle schoolers ride the same buses high schoolers do, so pushing the high school time back adds a major wrinkle to the bus plans.

According to the Washington Post, homework could be one of the biggest detriments to students’ sleep. The national average per student is 2.7 hours of homework every day. Taking this into account, if a student starts their homework at 8 p.m, they will be working until almost 11, and likely won’t go to sleep before 11:30. If this student has to wake up at 6 a.m. the next day, they will have gotten three hours less than the recommended amount.

Cyrilla Truong says that it is imperative that a dialogue is formed between students and teachers about the amount of work assigned. “I think what we can do as students is to be more proactive with our teachers and explain that we need to have an easier workload sometimes. And they need to understand that sometimes the workload they give is too much and that they need to be better at distributing work,” she says.

With everything else in their lives, it is impossible to expect that high schoolers get a healthy amount of sleep every night. The connection between sleep and your well-being has been proven countless times over. It affects mental health, physical health, and academic performance. Anything that can squeeze a few more minutes of sleep improves every aspect of your well-being, and your grades. Simply put, if you proactively prioritize your sleep, tomorrow will be a much, much better day.