On Monday evening, Montgomery Blair High School hosted a town hall meeting for Montgomery County (MoCo) high school students to meet and talk to students from Marjory Stoneman Douglas High School (MSD), where the school shooting in Parkland, Fla. took place. This forum came in the wake of the widespread call for action against gun violence, which was followed by student protests throughout the country. 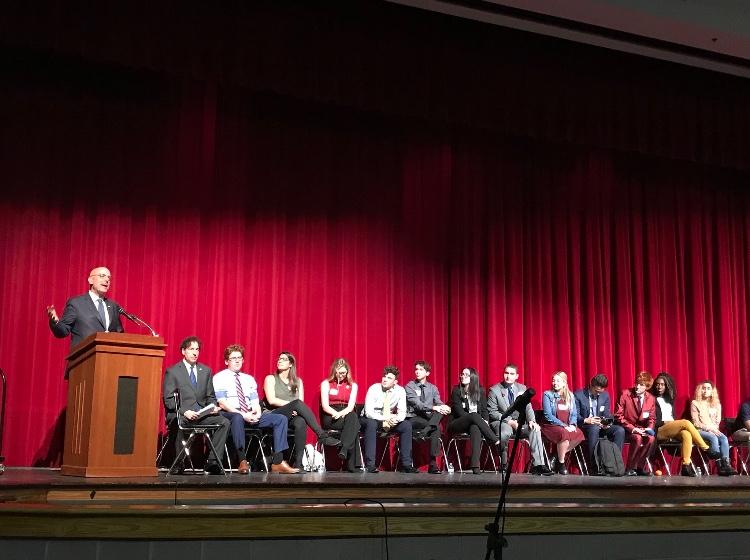 Photo:
The meeting was organized by Rep. Jamie Raskin (D-Md) and Rep. Ted Deutch (D-Fla) about 24 hours in advance. After hearing the MSD students would be in town speaking with political leaders on Capitol Hill, Raskin arranged for the students to speak with some of their peers as well. "I said, 'Why don't you bring them out to Montgomery County, and we can have a big event?' We want to make sure we have young people from all the schools represented and we didn't have that much time to organize it, but I was thrilled that Ms. Johnson opened the doors of Blair," Raskin said. 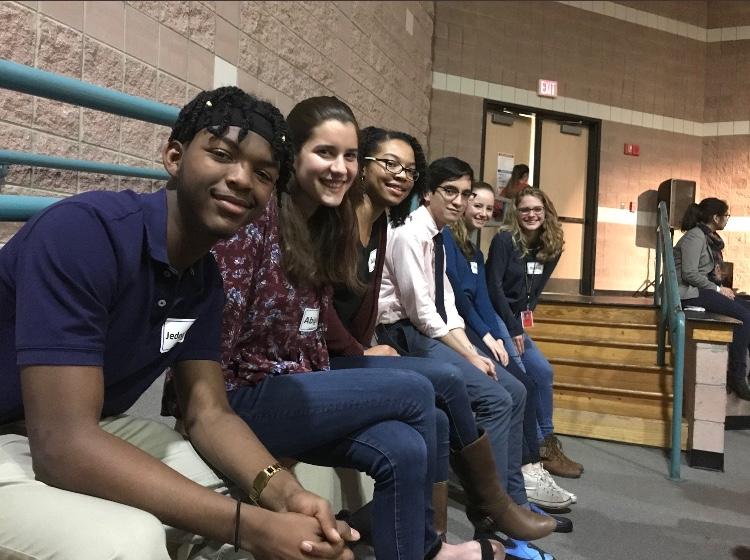 During the meeting, the MSD students emphasized that the next step for the movement would be their march on March 24, and that it is important not to let the conversation surrounding gun control fade away. Jamie Raskin said that Mary Beth Tinker, from the groundbreaking Tinker v. Des Moines case, would be at the March 24 protest. Blair senior and OneBlair member Margot Bloch said OneBlair will provide free housing to students travelling long distances to participate in the March 24 march.

Daniel Gelillo from Richard Montgomery High School said that there would also be a protest on March 14. "It's a grassroots effort," Gelillo said. "Spread the message about about the marches on [March] 14 and [March] 24 and make sure you're out there."

During the forum, anger at the National Rifle Association (NRA), the president and inaction of adults in positions of power was expressed. When asked by a student about what the #NeverAgain and #EnoughisEnough movement is doing to actively combat the NRA, Delaney Tarr responded that they were making it toxic for people and corporations to associate with the NRA. "The intention that we have with the NRA is for it to be a badge of shame," she said. According to Raskin, the pressure placed on the NRA by the students is effective. "This is one reason why the NRA is not going to put this genie back in the bottle. The revolution has been unleashed and the young people know how to communicate," he said.

Many students had questions about what direct action can be taken other than marching. Jaclyn Corin emphasized the need to vote, register to vote and to be educated about who you're voting for. Corin stressed that many young people do not vote and in order for the movement to progress, that needs to change. "Run for office and vote. I can't express how important that is," said Alfonso Calderon.

Corin echoed this sentiment, saying that young people will soon be in a position of political power in this country. "We're the future and when the politicians retire and we gain their office, it's our generation that's going to make the change because we've grown up with mass shootings, we've lived through them. It's become our normal, and we don't want to have that be our normal for our kids," she said.

Another MSD student brought up letter writing, and how it was important to write paper letters instead of sending emails.

In an emotional turn, Emily Elizabeth Ledbetter, a sophomore from Einstein High school, took to the microphone to share her personal experience with gun violence and to tell the MSD students how much they inspired her with their strength in the face of tragedy. "This is just a huge problem and the fact that my mom and my brother both died by guns, and my grandfather too, it just touches me so much that there are actually people coming out here to support this cause," said Ledbetter before going up on stage to give the Florida students hugs.

There were many more inspirational moments throughout the night, and talk of how young people are the voice of change. "I hope Generation Z can get it done, because there's no more letters in the alphabet," said Rockville student Michael Pankowski. The night's turnout, which filled the auditorium, proved to be an uplifting sight for the MSD students. "This is my first time seeing this number of students out here to support our movement, to support the students' movement, and it's amazing. It's so uplifting to know that so many of you stand behind us. We are not alone. We have this infrastructure of young people, ready to make a change, and that is just so inspiring," said Tarr. Calderon echoed her sentiments. "My biggest takeaway from this was definitely inspiration for the future of this country. I didn't know how many kids were gonna be here, I didn't even know about it ten minutes ago, but I have never been this happy in my entire life," he said.

Though they spent much of the night trying to convince the audience that they were "just high school students," sitting on stage answering every question with passion and eloquence, the students from MSD left the entire auditorium in awe. Chris Grady explained that they just wanted to speak plainly and put things in the simplest terms possible. "We're so sick of politicians just dancing around every single question we ever ask, so we want to be as upfront and forward with people as we possibly can," Grady said. 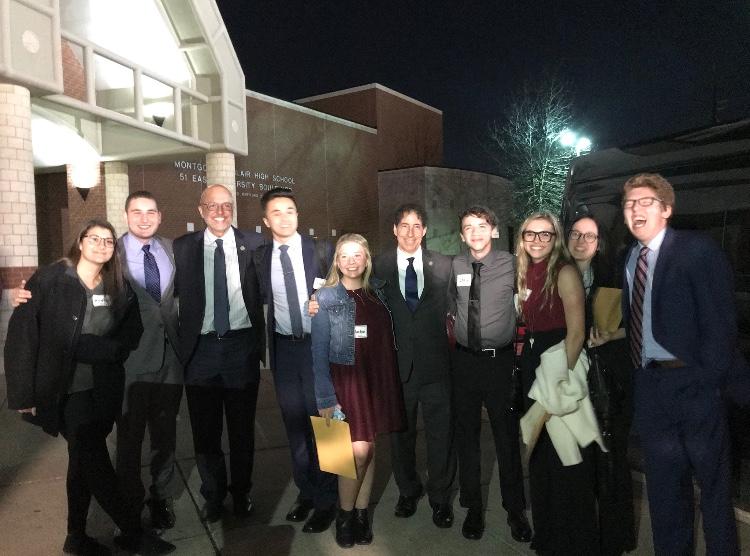 Taking the brave actions of the Florida students as inspiration, many MoCo students began to make plans to further the fight for gun control in their own schools. BCC senior Anaya Bernardo explained that she would be discussing the event in her classes the following day in order to encourage more students to take action. Students from BCC also started a museum in the fall to highlight issues that teens face and to allow them to express their voices. "We're hosting a conference on March 13 at the Studio Theater in D.C. and we're going to have a main focus on gun violence and what we can do about that," junior Julia Mencher explained.

Northwood senior Katie Morrow was inspired by the conversations to go out beyond her community and spread awareness of the issue. "While sitting here, I was thinking about going door-to-door, making sure people are voting for the right people, making sure that their children are registered to vote, really getting out there and protesting, sending letters to your representatives and maybe even doing an outreach program where we go to a red area in Maryland," she said.

Student panelist Angelique Wong hopes to use the momentum from the night to organize more events in her own school. "We have to keep the discussion going, we can't let it die down. We have to build up and build up until we're such a loud voice that you can't help but listen," said Wong. "I know students at my school that would love to get involved in stuff like this, so I'm going to get some other student groups involved, and we're all going to come together and we're going to work to make this movement bigger at our school."

The night opened with a variety of musical pieces from Sankofa, InToneNation and Blair's chorus, and ended with Blair Principal Renay Johnson giving Blair T-shirts to the MSD students.

As students filed out of the auditorium at the end of the night, a group started to form around a single protester in the parking lot, an old gun collector with a body camera and a large sign reading, "American freedom is not the enemy." After all the excitement and inspiration of the night, many students, including Blair junior, Nunyat Tefera, felt empowered to engage him in debate and left frustrated when he refused to listen to them at all. "It just makes me angry as a student who sits in class every day, fearful, that we have people like him who are trying to downplay our fear and our struggles for this policy," Tefera said.

However, this one interaction didn't derail the overall momentum of the night, with many students setting their sights on the 2018 midterm election as a catalyst for the changes necessary to make shootings like the one in Parkland never happen again. "There are some things that we're taking small steps on, but in order to take the big leaps and bounds that we would need to tackle this incredibly complicated and large issue, I think we need to focus on taking back Congress in 2018," Blair senior Chas Goldman said.