The first bike lanes are being implemented in Area One, starting with Silver Spring. The Silver Spring Protected Bike Network, which was completed about two months ago, features bright, high visibility green bike lanes.

County Council President Hans Reimer was a strong advocate for the bike infrastructure reform effort. He explained that what they have done in Silver Spring is "look at the whole network comprehensively and then mapped out how a particular set of lanes, if built, would make the entire downtown bike-able and safe."

The purpose of piloting the soon-to-be countywide bicycle network plan in Silver Spring is to show how the program can have a positive effect and prove that it will be successful in other areas of the county.

Fortunately, The Silver Spring Protected Bike Network has received a lot of positive feedback from residents. "I've definitely talked to people already who are overjoyed by the segments that are complete and are using them on their commute or for recreational purposes," Riemer said.

Due to this success, the new comprehensive bicycle lane network will soon be similarly implemented in Areas Two and Three. Montgomery County is currently building similar bike infrastructure in the Rockville/White Flint areas. "White Flint is already started and so far there are two segments of the network that have been built there," Riemer said. Plans for bike infrastructure in Bethesda are also currently being drafted.

Since each of these cities are unique in their landscape and needs, they all require a different building approach. 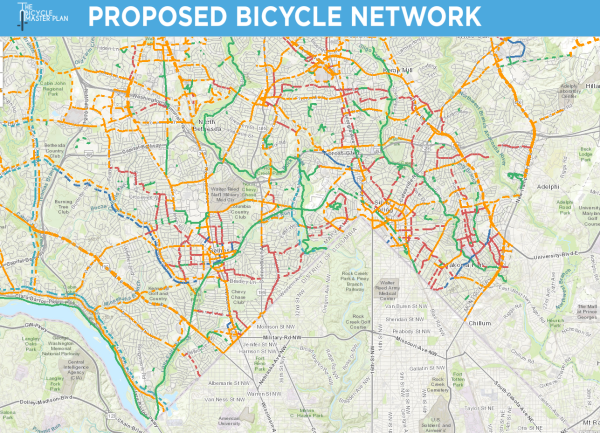 County officials determine which approach is appropriate for each specific area based on a digital map they developed that shows the "stress tolerance" levels of all roadways in Montgomery County. The map classifies each street's danger and congestion on a scale from "None," meaning everyone can bike, to "Very High," meaning few people will bike.

Riemer described the various types of necessary bike lanes in different situations as a gradient spanning from cars and bikes sharing lanes to full on protected, separated bike lanes. The county will use whichever approach is appropriate for the location.