Bobby says: Marcus Williams and Darrelle Revis are going to keep Tyrod Taylor's passing game on lock. LeSean McCoy has looked pretty good since returning from injury, but the Jets should still take this one.
Sandeep says: The Jets secondary is just too good.
Lauren says: The Jets have been looking strong this season while the Bills have been on and off.
Charlie says: Everything I know about football is going against me in this one, but I've gotta pick Rex Ryan against his former team. Allen Robinson also managed to live comfortably on Revis Island last weekend. Go T-Mobile!

Bobby says: Drew Brees may just continue his monster games this week. The Redskins defense had no answers for the Patriots offense, and the Saints will bring more of the same. Expect a closely contested high scoring game.
Sandeep says: The Saints have been on a roll while the Redskins have been pretty mediocre.
Lauren says: If Drew Brees plays like he has been then the Redskins defense will really struggle.
Charlie says: This game could go either way, but it's tough to bet against the Saints given how well Drew Brees has been playing.

Bobby says: Packers get back on track this week.
Sandeep says: If even Charlie picks the Packers, I think they're a lock for the win.
Lauren says: Despite the recent loses the Packers are still a dominant team.
Charlie says: I don't care how poorly the Packers have been playing, they will beat the Lions in Green Bay.

Bobby says: Tampa Bay has too much offensive firepower for Dallas to keep up in this matchup. This is another good matchup for Jameis to continue to adapt to the NFL.
Sandeep says: With their quarterback still injured, the Cowboys are not able to muster much of an offense.
Lauren says: As long as the Cowboys are missing Romo they are going to struggle.
Charlie says: As long as Tony Romo is out, the Cowboys will struggle to get a win. Jameis Winston and Doug Martin are having pretty solid years, and at home they should take down the silver and blue.

Bobby says: The Panthers got by the Packers, they better beat the Titans.
Sandeep says: The Panthers are the surprising undefeated team of this season and don't look to lose that streak against a sad Titans team.
Lauren says: #CamNewtonforMVP
Charlie says: Marcus Mariota just had a great game, but it was against the Saints abysmal secondary. The Panthers will stay undefeated.

Bobby says: This Rams team is really hard to figure out. All I know is that they're better than their 4-4 record and should shut down the Bears offense.
Sandeep says: If the Rams can get past their 3rd down troubles, they should be able to get by the inconsistent Bears.
Lauren says: The Rams are a decent team and have played some games, their problem is that you never know which Rams team is going to come out and play.
Charlie says: Todd Gurley and the Rams defense will win this one handily, no matter how poorly Nick Foles plays.

Bobby says: The Eagles are slowly starting to figure themselves out. Sam Bradford had an impressive game last week, and things should continue for him this week.
Sandeep says: Bradford finally figured out Chip Kelly's offense and will beat the Dolphins who have lost two straight now.
Lauren says: The Eagles are improving every week and are building a good chemistry with each other as they figure out their offense.
Charlie says: The Eagles have started to get their running game going, opening up opportunities through the air. This is one of the better games this week, but the Eagles o-line will do a better job of protecting Bradford than the Dolphins will Tannehill.

Bobby says: The Browns are going to pull off the upset.
Sandeep says: The Steelers just can't catch a break, with Le'Veon Bell, Ben Roethlisberger, and now DeAngelo Williams injured. If Williams is able to play on Sunday, the Steelers should easily roll over the Browns.
Lauren says: Although the Steelers are facing a tear of injuries they are a much stronger team than the Browns.
Charlie says: Landry Jones can do a better job of getting the ball to Antonio Brown than Michael Vick did, and DeAngelo Williams is on a tear.

Bobby says: Baltimore is heating up.
Sandeep says: The Ravens season has been marred by injuries and close losses but they are not as bad as their record suggests. Bortles has been playing well, but the Ravens will be energized coming off their bye and take this one.
Lauren says: Hopefully the Ravens come out of this game with a much needed win, but you never know with this team.
Charlie says: Coming off their bye week, the Ravens will figure out a way to get their offense going. Blake Bortles eat the secondary alive, but Justin Forsett figures to have a better game than T.J. Yeldon.

Bobby says: Minnesota is making a charge for the division, and they're not going to let the pathetic Raiders come in their way
Sandeep says: This game should be fun to watch but the Raiders looked good even in their loss against the Steelers. As long as they don't have any defensive lapses again, they should go above .500. Wow, imagine that - the Raiders above .500.
Lauren says:
Charlie says: Teddy Bridgewater is iffy, giving the Raiders passing game the upper hand. I don't see Adrian Peterson having another 100-yard day in this one. 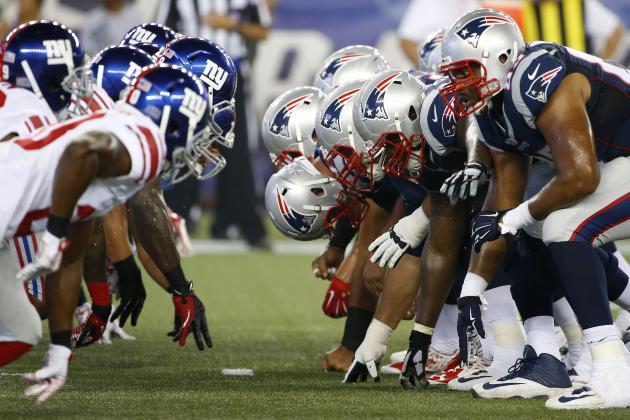 Photo: The Patriots and Giants are squaring off this week.

Photo: The Patriots and Giants are squaring off this week.

Bobby says: LeGarrette Blount is going to run through the defense.
Sandeep says: The porous Giants defense is too weak for them to have a chance in this game.
Lauren says: The Pats will roll over the Giants defense.
Charlie says: Tom Brady vs. one of the worst pass defenses in the NFL. This Patriots blowout will unfortunately not be as fun to watch, because Dion Lewis is on the IR.

Bobby says: Peyton Manning is closing in on the most passing yards in history, and he will set the record in victorious fashion.
Sandeep says: Manning has thrown 13 picks this season, but that won't really factor into this game as they face a struggling Chiefs team.
Lauren says: As long as Manning can keep up the Broncos offense they'll come out with a win.
Charlie says: The Chiefs defense is good, and with Peyton chasing his yardage record left and right, he figures to throw more picks than touchdowns this week.

Bobby says: I love Carson Palmer.
Sandeep says: Carson Palmer is healthy for this matchup! Not only is he healthy, he also ranks third among quarterbacks in the league for passer rating. The Cardinals are looking good this season and should beat the desperate Seahawks.
Lauren says: If the Seahawks defense can stand strong and the offense can get their running game going the Seahawks will come up with a close win.
Charlie says: The Cardinals pass rush is going to sack Russell Wilson every opportunity they get, and if anyone can beat the Legion of Boom, it's Carson Palmer.

Bobby says: Cincinnati has one of the most potent offenses in the NFL, and JJ Watt won't be able to contain it.
Sandeep says: The Bengals are too good to fall to the Texans. Andy Dalton gets his revenge over the team that bounced him from the playoffs his first two seasons.
Lauren says: The Bengal are just playing too well to take the L to this team.
Charlie says: The Bengals are stronger at every position than the Texans, unless they start J.J. Watt at quarterback.