No misery in "Les Mis"

The Blair Players enthrall in this multi-layered French musical

The Montgomery Blair Players brought Victor Hugo's classic story of love, promises and revolution to life in the student-run production of "Les Misérables." This timeless novel was transformed into an opera-esque musical by Alain Boublil and Claude-Michel Schonberg, which the Blair Players made their own with stunning vocals, music and set design. 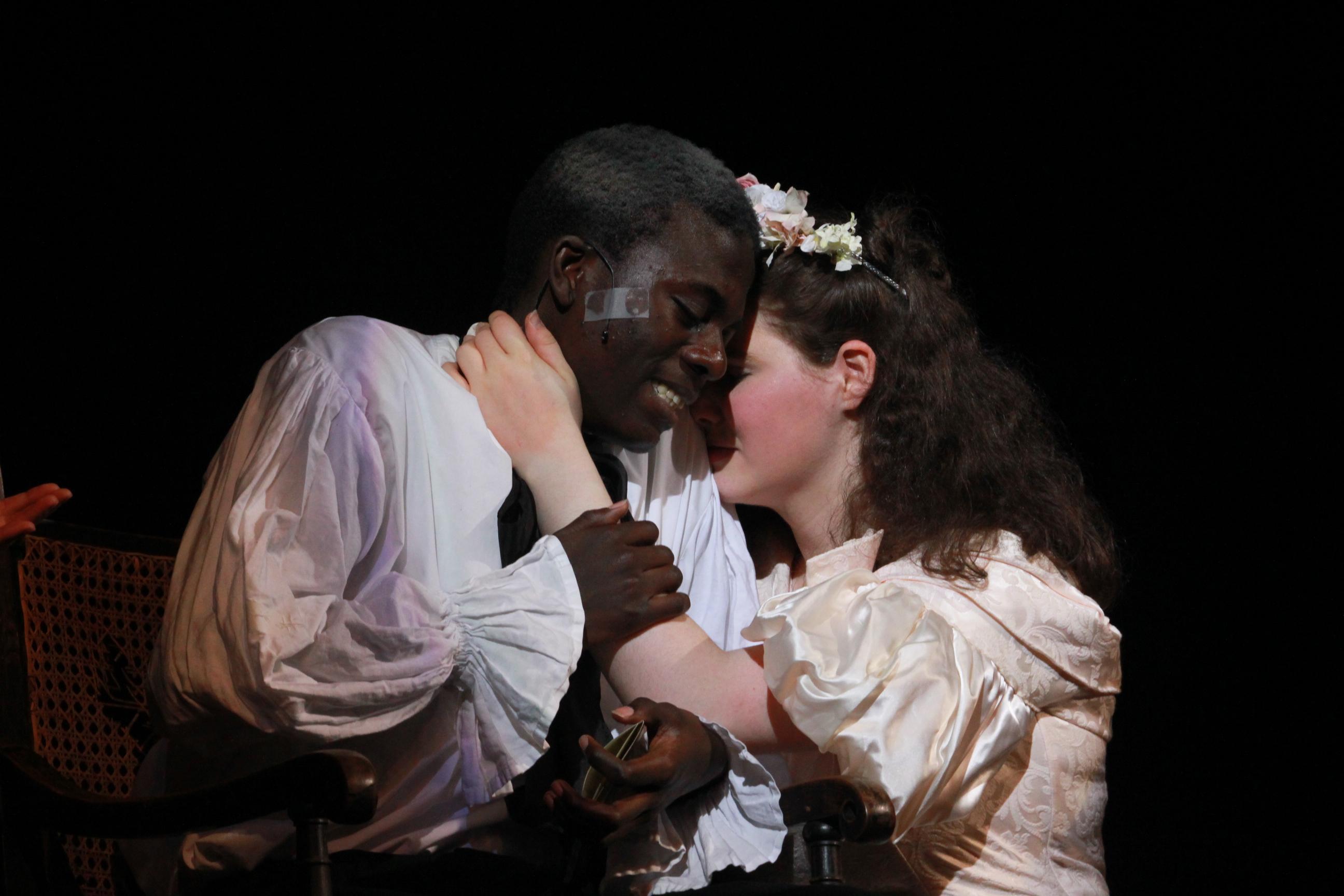 This is the second time the quintessential French tale has come to Blair, the first being the play version, and now the Players have tackled the musical. "Les Misérables" follows the life of former convict Jean Valjean (senior Audrey Tchoukoua) who was imprisoned for 19 years for stealing bread to feed his sister's dying son. Valjean is released on parole by Inspector Javert (senior Ian Silver-Gorges) but he struggles to assimilate back into society. He steals from a priest who then lies to protect Valjean, on the condition that Valjean will change his ways and become an honest man. Eternally grateful to the priest, Valjean agrees and breaks parole to start anew.

The show hits its stride as Valjean begins his new life. First, he becomes a successful factory owner and then a mayor. He comes across a woman, Fantine (junior Leora Goldbloom-Helzner), who, on her deathbed, asks Valjean to protect her daughter, Cosette (sophomore Anabel Milton). To save her, Valjean meets Thenardier (senior Sid Nanda) and Mme. Thenardier (senior Alison Kronstadt), two inn owners who watch over Cosette. At each new phase of his life, Valjean cannot seem to shake off his relentless pursuer, Javert. This only adds to the already prominent drama of a love triangle between Cosette, Marius (senior Enoch Hsiao) and Eponine (senior Carina Zox), and the uprising of a French revolution. With so much going on this production goes by quickly, but if you can keep up, it is definitely an entertaining ride. 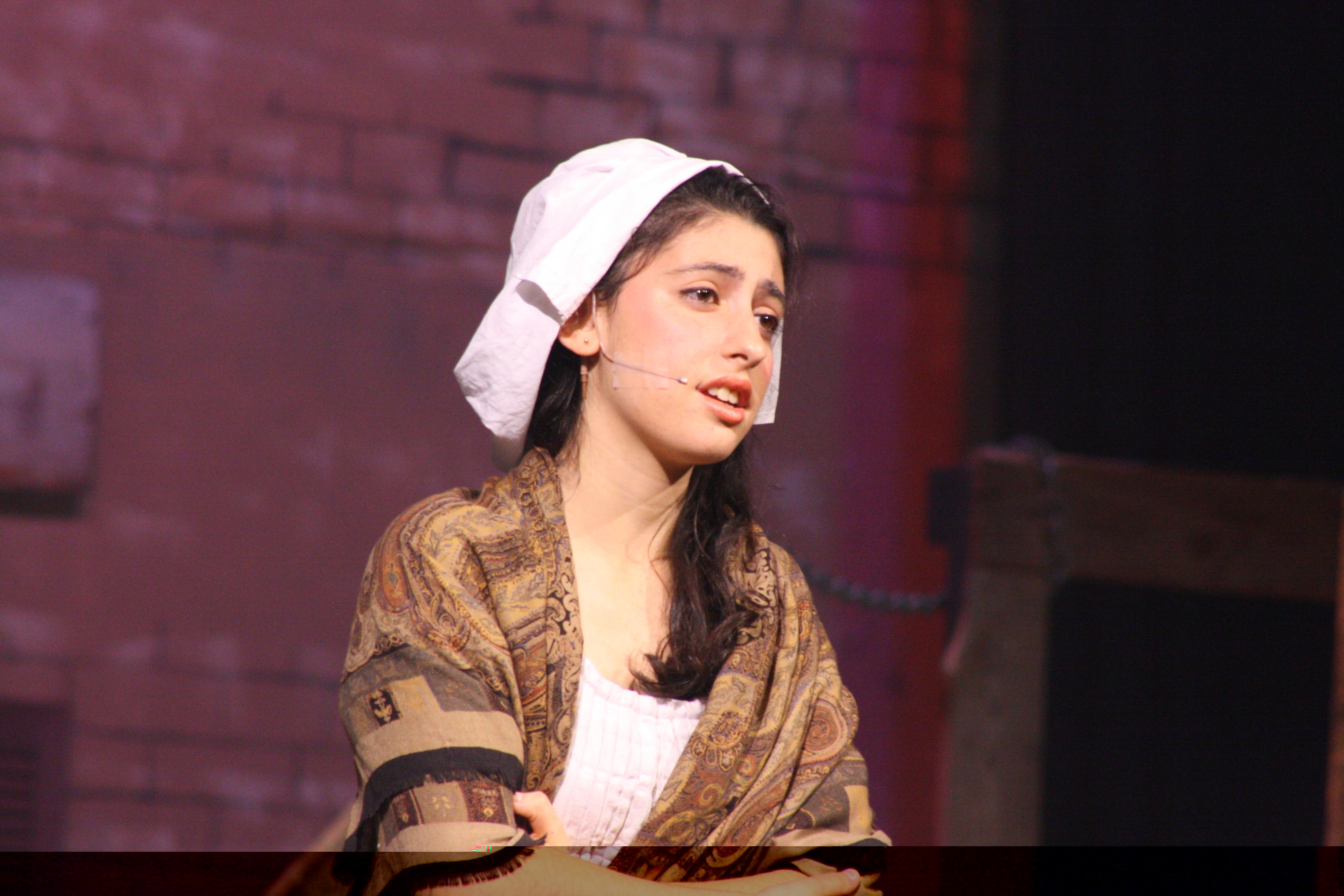 The overall performance had many strengths, but it was the vocals that blew the audience away. In a musical that is almost entirely in verse - "Les Mis" has startling total of 30 musical numbers - the voices of the leads and the ensemble really shined. From the soliloquies to the whole cast conclusion, all of the vocals were on point. Notable performances came from all of the lead roles including Zox, Tchoukoua, Silver-Gorges, Hsiao, Goldbloom-Helzner and Milton. Of course, the vibrato and sweet sound of their voices would have been better received with enhanced sound equipment, as temperamental microphones wavered in and out, degrading their fantastic singing.

To compensate for the wavering sound, as well as the confusing French names, the show's lines and lyrics were projected on a screen above the stage. Although this was a helpful technique, it distracts from the players themselves – so it is ultimately a trade-off. 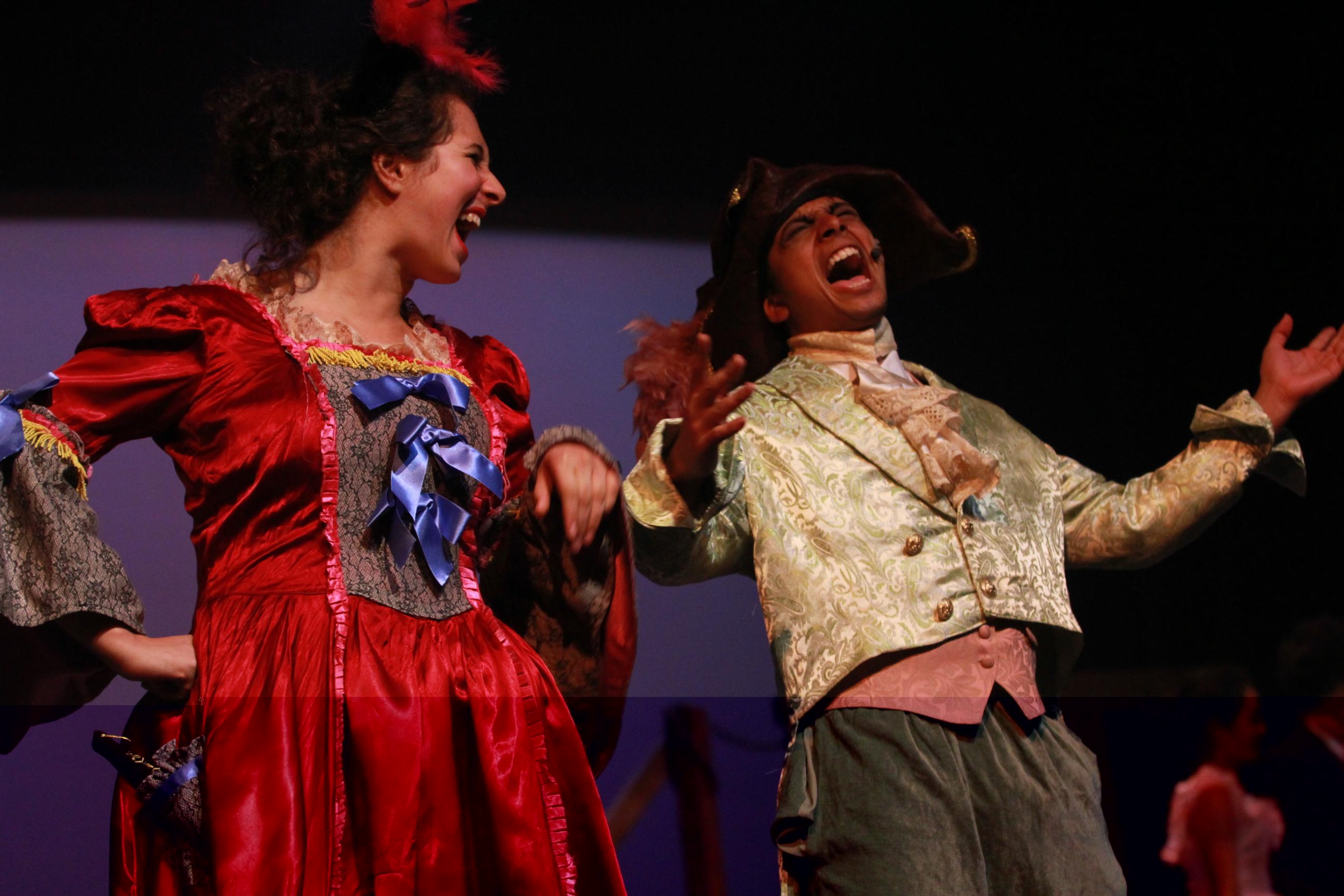 Photo: The Thernadiers (Kronstadt and Nanda) at Marius and Cosette's wedding.

The Thernadiers (Kronstadt and Nanda) at Marius and Cosette's wedding. Photo courtesy of Tolu Omokehinde.

In the midst of a revolution and love drama, the most enjoyable comic relief came from the Thenardiers, played by Nanda and Kronstadt. The love-hate relationship of this money-obsessed, bickering couple provided a dash of much needed humor in an otherwise somber plot.

Furthermore, under the new leadership of orchestra director Adam Stephens, the pit orchestra lived up to its high standards. The phenomenal score transformed the ever-changing mood from a dismal death scene back to the riveting reality of an ongoing revolution.

And, as always, the show would be nothing without the stunning work of the stage crew, which designed a flawless set that perfectly recreates 17th century France. The audience even broke out in a round of applause at the sight of the barricades, composed of shutters and couches scattered on a dazzling mountain of household items.

Despite sound difficulties and a somewhat complex plot, the Montgomery Blair Players have done it again. "Les Misérables" is yet another delightful success. The cast will have two more performances on April 27 and 28. Tickets are $10 for adults and $7 for students and seniors. If you want an enjoyable show that will make you laugh, cry and sit in awe of beautiful sets and excellent acting, this show is a must see.