Hall of Famer and Blair graduate Tom Brown came to Blair to receive a golden football award from the National Football League (NFL) on Nov. 13. He spoke to student athletes about playing sports at collegiate and professional levels and the impact his teachers and coaches had on him. 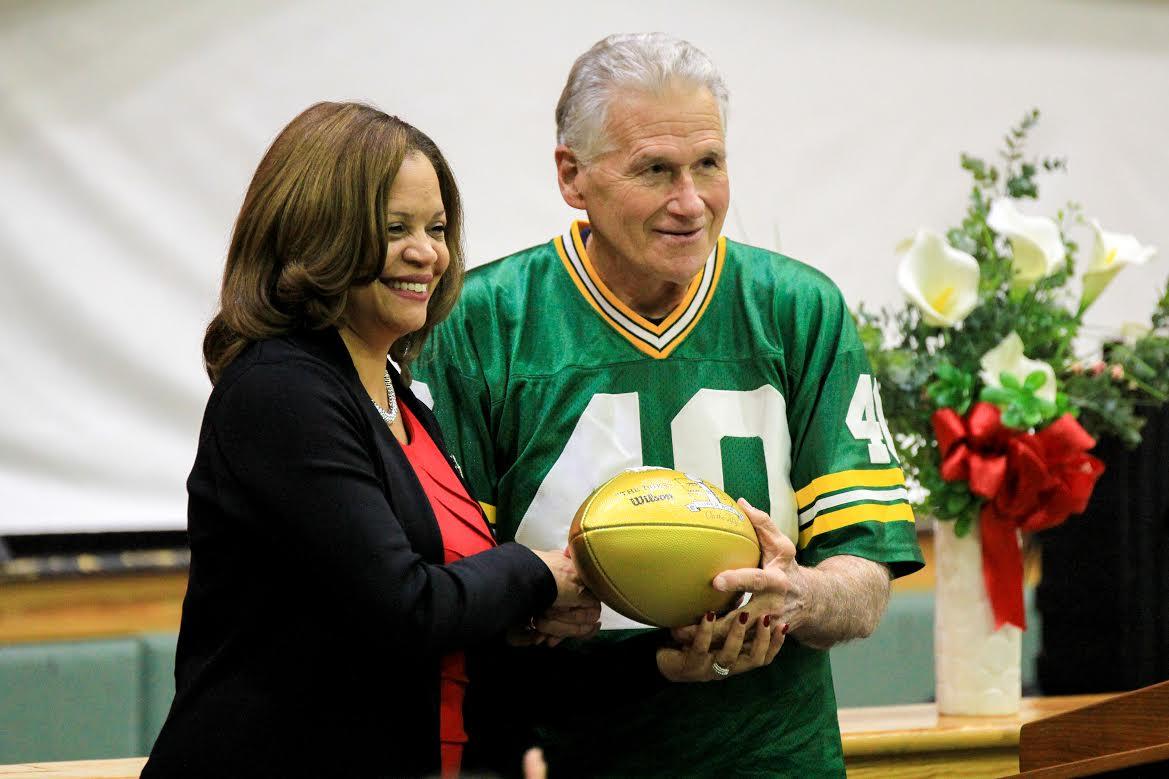 Photo: Tom Brown receives a golden football from the NFL.

Brown, a former football player for the Green Bay Packers, received a golden football for playing in the NFL's first Super Bowl. The award is part of the NFL's "High School Honor Roll" program, intended to "acknowledge schools and communities that have directly influenced Super Bowl history and impacted the game for the better."

Upon receiving the award, Brown, one of only four men to play in both the NFL and Major League Baseball (MLB), talked about the importance of listening to teachers and coaches. "Knowledge is power," he said. "And education prepares you for the biggest game of all: the game of life." He then talked about his days with the Packers under Coach Vince Lombardi, a man who was "not just a football coach, but also a life coach." Brown said Lombardi was his biggest motivator and urged students to find the coach or teacher that would be like a mentor to them.

According to Brown, Lombardi advised everyone to find something they loved to do. "'If you find your niche, you will never work another day in your life', Lombardi once told me. And it came true," Brown said. "I found my niche doing something I loved and I never considered it as work."

Brown acknowledged that it was not always easy to play at the professional level. "Vince Lombardi used to tell us, 'If winning was easy, everybody would be a champion,'" he said. Brown faced a lot of challenges but his advice to students was to keep moving. "When you feel like stopping, run through that wall of fatigue," he said.

Senior football player Tyler Kang believes that Brown visiting Blair could not have come at a better time, with the Blazers preparing to face Quince Orchard in the first football playoff game. "We are pushed to play harder tonight, pushed to play harder and achieve what [Brown] achieved in his career," he said. "We all are going to try to be like him and push ourselves to the limits."

In addition to coaches and teachers, Brown stressed the importance of a team that had each other's backs and good team chemistry.

Physical education teacher Louis Hoelman III praised Brown for his uplifting message. "What [Brown] said was really inspiring, and his passion for his coach was moving," he said. Hoelman believes that Brown receiving the golden football was a boost for Blair's athletic program. "You can tell [Brown] really loves Blair and it has helped him succeed. I think this is great for the morale of the athletic program here, having a Super Bowl winner tell students that it is not out of their reach," he said.