"The Gunslinger Born": a brilliant birth

If "The Good, the Bad and the Ugly" is the epitome of spaghetti Westerns, and Stephen King's "The Dark Tower" series is the epitome of fantasy fiction, then the new Marvel comic "The Gunslinger Born" is their offspring whose godparents are H.P. Lovecraft and Clint Eastwood.

"The Gunslinger Born," written by Peter David and drawn by Jae Lee, focuses on anti-hero, Roland Deschain, from King's hit series "The Dark Tower," which recently concluded its run with the publication of the seventh, and final, book in 2004. The first issue of "The Gunslinger Born" opens with young Roland, an intrinsically complex and thought-provoking character. The comic continues to tell of his origin, specifically how he became the infamous gunslinger, a peacekeeper among his community that can only be earned through training and the mastery of essential skills. When the comic opens, Roland is training to be a gunslinger, which is essentially a glorified cowboy who is respected all around his community. 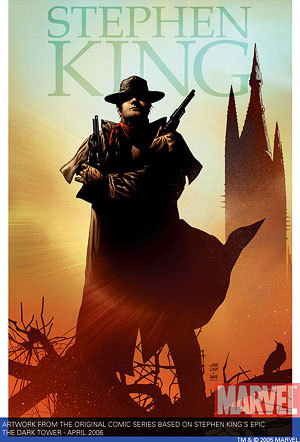 Although based in a realm that is not Earth, the comic still has a Western feel to it, because of both the art and the writing. Lee's art introduces the main characters sporting cowboy hats and chaps and surrounded by a dusty and barren terrain, an image typically associated with Westerns. The social hierarchy is also very similar to that of Western films in whicn men are dominant protectors and women are submissive and emotional. Also typical of Westerns is the multiple shots, or in the comic's case, multiple panels, of two opponent's faces as they share witty banter before a fight while the point of view slowly pulls in. Overall, while stilling maintaining the basic style of a graphic novel, both the art and writing in "Gunslinger" has been clearly influenced by Western films.

However interesting cowboy Roland Deschain may be, it must be noted that King openly admits that the hero is inspired by "the Man with No Name," played by Clint Eastwood in the "Dollars Trilogy" directed by Sergio Leone. "The Man with No Name" is a stock character who is often tough and independent, while remaining vague and mysterious at the same time. Similarities that Deschain and "the Man with No Name" share are their basic sense of justice and their mysterious nature that is much of their appeal. Just like Eastwood's character, Deschain is an independent tough outlaw who, unlike normal heroes, will fight dirty if the situation calls for it. While both Deschain and Eastwood only focus on their own survival, both have lapses of their tough nature and reveal a sensitive side to the audience.

The script offers various opportunities for Roland's character development, though it is unlikely that many strides will be made in Roland's development since ambiguity and mystery are a distinct part of his character. While the script is not particularly clever or witty, the language is beautiful with its analogies and powerful imagery that, in tandem with the art, form an intense visual experience.

The detail in the art and the emotion conveyed through the art is particularly surprising even though an experienced and acclaimed artist was selected to illustrate "Gunslinger." Characters are physically unique, the background is vivid and the colors are brilliant. The coloring is done by veteran Richard Isanove who is known for being a detailed and thorough colorer and whose experience significantly adds to the overall demeanor of any comic. The color in "Gunslinger" is no exception to Isanove's skill; the overall look of the comic stunning.

In fact, the only regrettable aspect of the comic is that readers who are unfamiliar with the "Darktower" saga and the reality that King created for the stories will be more confused than the three blind mice in trying to drive through New York City.