In a hard fought game, Blair achieved a narrow win against the Richard Montgomery Rockets. The game started out in Blair's favor, with the team scoring its first run early on and playing strong defense to keep RM from scoring. But, small fumbles in the defensive zone towards the end of the game nearly closed the lead that the Lady Blazers had struggled to maintain. Richard Montgomery put up a good fight, with their pitcher being one of the toughest the Blazers have faced all season. But in the end Blair's defense helped them come out on top, beating Richard Montgomery 6-4 and securing the division title for the second year in a row.

Blair started out on top. The characteristic team chemistry was present throughout the game and they had lots of crowd and bench support that helped cheer them to victory. Junior Mildred Devereux quickly scored the first run of the game in the bottom of the first inning. The next few innings were scoreless for Blair and the focus shifted to fending off the Richard Montgomery offense. A small slip-up in the outfield during the top of the third allowed RM to slip its first runner through. 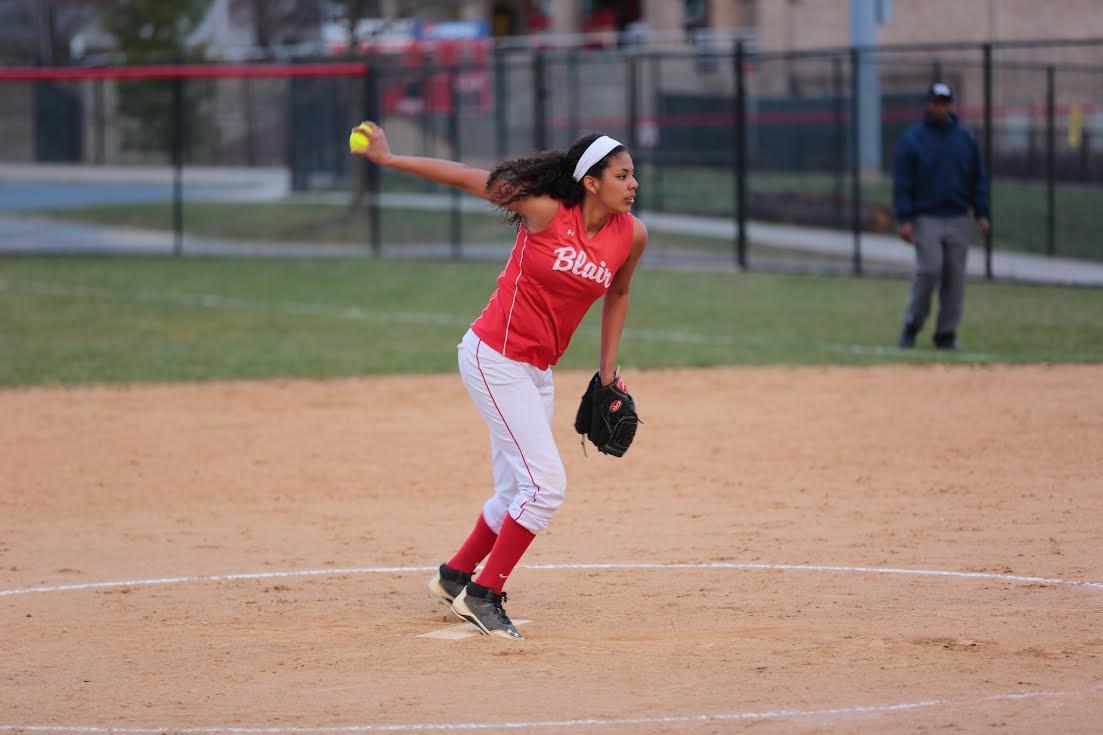 After RM got its first run, Blair's defense tightened up. The Blazer defense shined at the top of the fourth inning. Senior catcher Maria Cruz made a beautiful throw to junior Reva Kreeger, who successfully tagged out a baserunner.

The Lady Blazers came back in the fifth inning. With the bases loaded senior Andrea Brown hit a double that sent junior Anna Reachmack home. Richard Montgomery made some key fielding error that allowed senior Kerry Madden to hit an RBI triple that sent both Brown and Devereux home. Following Madden's play, senior Megan Houilhan hit an amazing home run. With their team up by five the Lady Blazers entered the sixth inning re-energized.

After an easy save by Devereux at the top of the seventh, Richard Montgomery slowly started to turn the game around. They quickly made three runs, nearly closing the five run lead the Blazer's had. Despite these runs though, the team still seemed confident that they would win. "We played at our level throughout the whole game and we were really intense and focused the entire time. We were confident from the very start and there was no way we were going to lose,” first baseman Kreeger said.

With the bases loaded and no strikeouts, pitcher Karylena Cruz threw crucial change ups that shut down the Rockets' gaining offense. After Cruz struck out two runners, Devereux helped close the game by catching a pop fly and knocking out a third.

Throughout the game Blair's defense had sure eyes and steady movements, and despite giving up a few runs in the final inning, they pulled together when it really mattered. Coach Louis Hoelman was aware of the atypical defensive mistakes made by the team during the final inning. "After we got a 6 to 1 lead we wanted to close it out so badly that we rushed some defensive plays and made some uncharacteristic errors to let them get close,” Hoelman said.

With this game the ladies succeeded in gaining their second consecutive division title. "It felt great to see the team win the division for the second straight year. It was a goal that the players set for themselves before we played our first game,” Hoelman said.