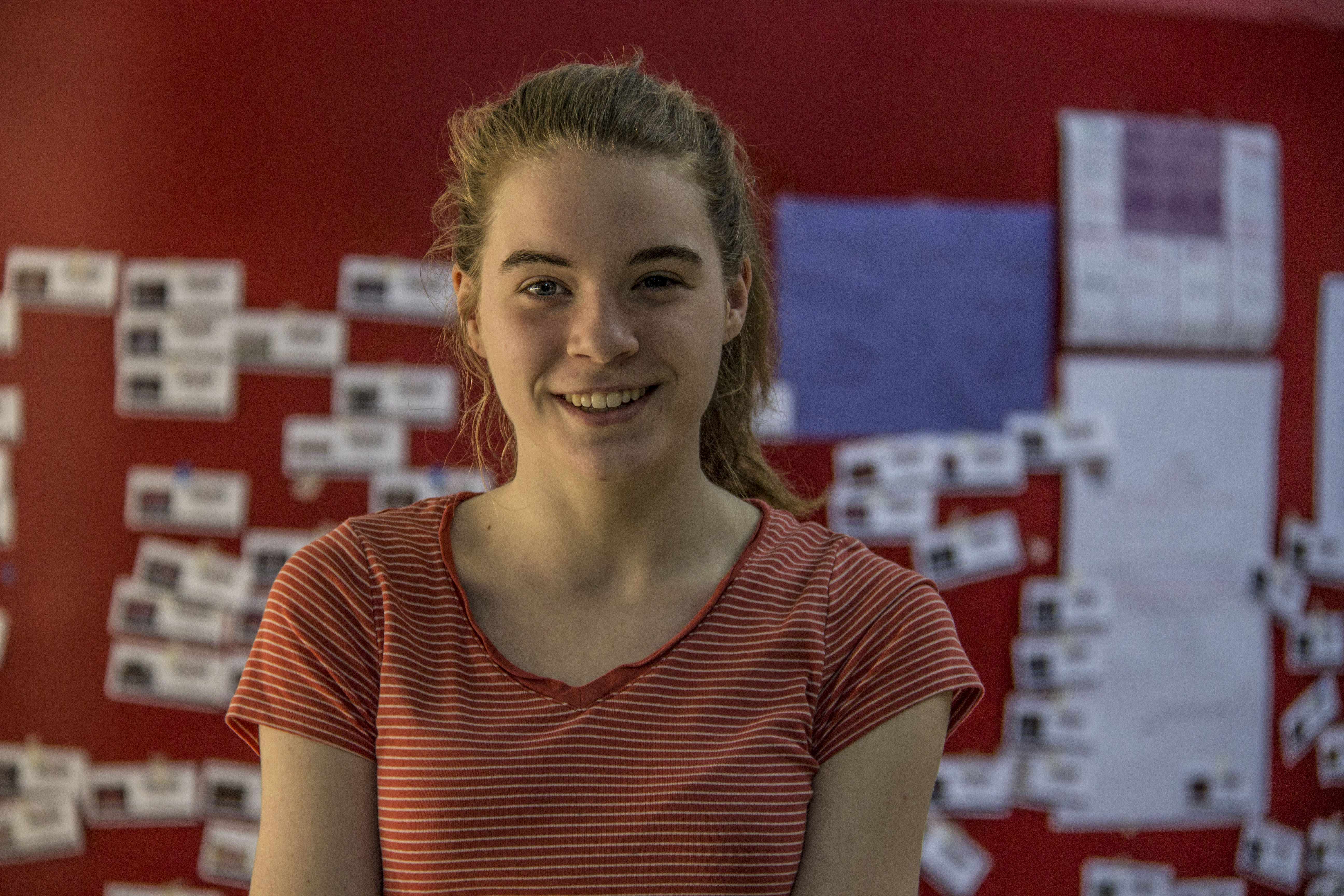 Part one of "Pregnant At Blair" explores Tamera's life, as she balances school, work, and the needs of her son, Tobias.

Junior Kate Hildebrant dribbles past Northwood players as she makes her way to the basket.

Junior Peyton Martin jumps up in the air in attempt to to block a Northwood players shot.

Junior Peyton Martin attempts a layup while a Northwood player tries to block her shot.

Junior Elise Haverland tries to outreach Northwood player in order to get possession of the ball after a missed shot.

The Blair Poms team shows off their high kicks during their halftime performance.

Blair basketball players watch the ball in the air after a shot was made.

Players jog off the field when a time out is called.

Blair football players burst through a paper banner at the beginning of the game.

Players wait in suspense at the line of scrimmage.

Blair cheerleaders do a quick chant before the start of the football game.

Blair students show off their school spirit at the red out homecoming football game.

Junior James Mason catches to ball and sprints down the field.

Photo: Down the Field

Senior Jonathan Hoang and Junior Chidiebere Oparah race down the field after Blair gets a touchdown.

Photo: Before the Kick

Blair football players line up before attempting a field goal.

Blair football players gather on the sideline for a mid-game huddle when Blair called a time out.

Sophomore Grace Walsh runs to first after bunting the ball.

Photo: Through the Tunnel

Nimah Ducey and family walk through the make-shift tunnel as a part of senior night festivities.

A Blair player does a few practices swings before going up to bat.

Photo: In the Mitt

Senior, Maia Greene Chang, catches the softball in her mitt.

Photo: A Swing and a Hit

Cassia Williams-Rogers, on first base, is ready to sprint to second.

Pitcher, Courtney Wyche, gears up before throwing a strong pitch.

Pitcher, Courtney Wyche, and catcher Niamh Ducey use hand signals to communicate with the other players.

Blair player runs to first after hitting the ball.

The softball seniors and family pose for a picture at their final home game.

A Blair and Northwood player collide while trying to get the ball.

One of Blair's lacrosse coaches watches the game from the sidelines.

A Blair defender chases after a Northwood player who has possession of the ball.

A Blair player is confronted by a Northwood defender.

Photo: Closing in on the Goal

A Blair lacrosse player nears the goal before being chased away from Northwood defenders.

Players were cheering on their teammates from the sidelines as they were up with a four to one lead.

The lacrosse team ends a huddle with a quick cheer before going back on the field.

Photo: Up in the Air

up in the air

Tobias plays with a toy phone

A group of Maryland high schoolers stand together with signs to rally for the Clean Energy Jobs Act.

Kallan Benson is not speaking until a renewable energy bill is passed, or until the session ends.

Sophomore Kanayo Duru talks to a reporter about climate change and why he is out rallying and lobbying.

One student activist creates butterflies out of yarn while sitting outside the Annapolis state house.

Photo: One Flower at a Time

The Green Club at Blair traveled up to Annapolis to partake in a youth rally against global warming. One of the activities they did was tying up homemade flowers on a fence in front of the state capital.

Sophomore Maddie Graham is a guest speaker at the rally. She is one of the leading young activists at Blair, organizing many events to get high schoolers involved in the fight against climate change.

Senior Anna Brooks holds up a sign at a rally in Annapolis for Maryland to become a greener state.

Alicia Coleman helps tie up flowers, joining the movement of many other students taking action on climate change.

A pile of trash is seen surrounding the creek. Beer bottles, water bottles, shoes, a sweatshirt and more were found somewhere in the creek during the annual cleanup.

Stuck in between rocks, Styrofoam is seen all around the creek. Many states and cities, including Takoma Park and Montgomery County, have established bans on Styrofoam, in part due to its propensity to infiltrate waterways in the form of microlitter.

Volunteer Tim Haverland, decided to jump right in, literally. He waded in the water to get trash off of the creeks bottom.

Plastic bags are a common sight along the creek, they're caught in trees, scattered around in the water. Volunteers tried to pick up all this trash, trying to make the creek beautiful again.

Photo: Walking a Mile in These Shoes

A volunteer holds up a lost pair of shoes.

Soda cans, beer bottles, Styrofoam, and more are strewn around the creek. Volunteers offered their time to pick up this litter.

Photo: You Don't Want To Wear This Sweatshirt

A young boy hits the jackpot, finding a sweatshirt caught in the creek.

A group of young children explore the creek with their orange bags, picking up trash along the way.

Photo: Trash Amongst the Trees

Many people in the Silver Spring/Takoma Park area headed out to the creek to pick up trash in the area.

Junior Zoe Abramson does not give up when opposing Sherwood player tries to steal the ball. The two feel to the floor, resulting in a jump ball.

Photo: Up in the Air

#33, Junior Adia Keene, jumps up to put in a basket, getting the Blair Blazers another 2 points.

2 Blair players jump up to grab ahold of the ball after free throw shots. Blair came away successful with the rebound.

Photo: Sprinting for the Save

Sophomore Kate Hildebrandt runs down the court to save a long pass, before it goes out of bounds.

Photo: Who's Going to Get the Ball?

#23, sophomore Payton Martin fights for the ball against Sherwood player. She held on long enough to get a jump ball for Blair.

Junior Lucy Martin alerts her teammates, letting them know that she is open.

Photo: Reaching for the Rebound

A Paint Branch and Blair player fight for the rebound, Blair coming away successful with the rebound.

Photo: Leaning into the Layup

#12 breaks through the Paint Branch players, going into up for a shot, and gaining two points for the Blazers!

Photo: Cheering on the Team

Blazer cheerleaders show their school spirit and encourage the basketball team on the sidelines.

#5 is focused on making a basket, while her teammates get ready to grab the rebound

The marching band cheers on the football team as they huddle before the game.

Blair teammates throw their hands in the air, signaling a touchdown.

The Blair marching band supports the football team musically from the sidelines.

Alfred Worrel, #13, rolls into the end zone for a touchdown.

The Poms team puts on a fun half time show!

Water Lilies peeked out this week, providing some color after several days of straight rain in Montgomery County.

Flowers are popping up and coloring Silver Spring with the bright buds as the weather continues to warm up!

Photo: Just Do It

You know it's spring when you see the white and pink buds of the cherry blossoms fill downtown D.C.

Photo: Take Me Out to the Ball Game

As winter comes to an end and spring starts, the baseball team is out on the field playing against their rival schools.

Freshman Maya Frey poses in the snow after the largest snow fall Maryland has seen this year.

A sign reading "#Never Again" is held up in the air, a common slogan created after the MSD high school shooting.

Freshman Elise Haverland holds up her sign to show support for the March for Our Lives and their call for stricter gun control in America.

A sign is held up demanding gun reform and stricter gun control, protesters joining together to keep guns out of the streets at the March for Our Lives.

A man holds a sign reading "Mass Shootings Require Guns" while others have written "Don't Shoot" on their hands showing the borrowing of messages of Black Lives Matter protests and the struggle of race representation in the March for Our Lives.

People flood the streets leading to the Capital with signs in hand at the March for Our Lives.

Freshman Maya Frey holds up her sign that reads "Enough is Enough" at the March for Our Lives protest for more gun control in D.C.

Blair students were some of the thousands that marched to the White House in protest for gun control.

On February 26, students from Marjory Stoneman Douglas High School traveled up from Florida to Blair to talk to Moco Students about gun control after losing 17 of their peers to a school shooter.

Photo: On the Steps

MCPS students gather together in front of the Capital, chanting against the NRA and assault rifles.

On January 3rd, the girls basketball team played against Northwood, emerging victourious with a 70-35 win.

Every year Blair hosts an "After Prom", a free activity from 12-4am for juniors and seniors to attend. It is full of prizes, games, and activities for the students to participate in.

Montgomery Blair High School students, with other students from around Maryland, congregate in Annapolis to rally and lobby for a renewable energy bill.

Volunteers collected at Sligo Creek to pick up trash and litter.

Gallery: The glamours of Glenstone: Gallery

Paint Branch takes on Blair, as the Blazers suffer a tough loss at home.

Students march on Washington for stricter gun control in as a part of the nation-wide event, March for Our Lives