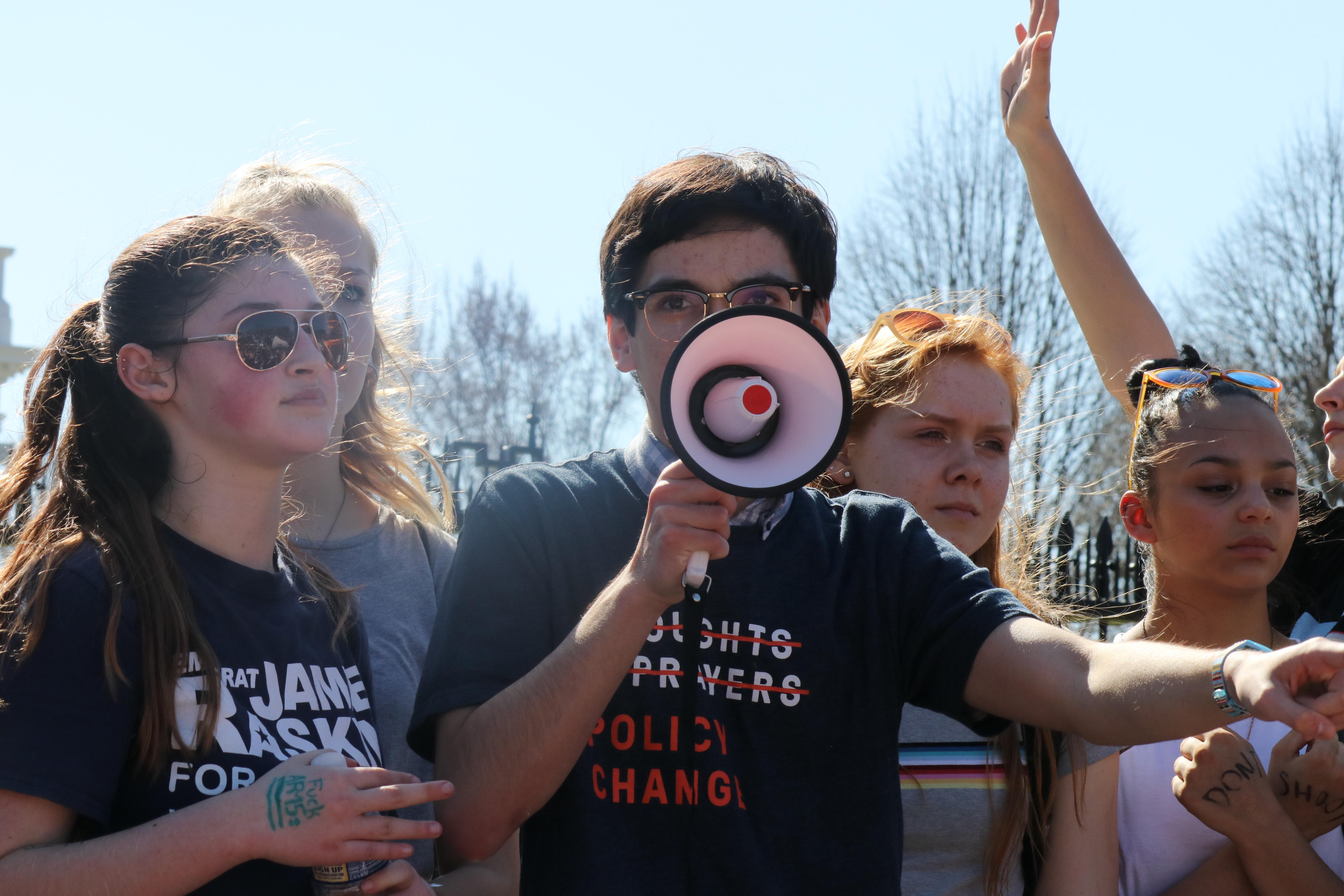 Photo:
Blair sophomore Jansikwe Medina-Tayac walked out because she wanted to support the survivors from the Parkland shooting. "The students there were calling for action, and they were calling for help, so I decided that it was time to do something about it," she said.

Blair senior Nora Olagbaju protested to support and stand in solidarity with students who feel unsafe at school. "There should never be a point in which a student should be sitting in their classroom wondering where would be the nearest point of escape be if a school shooter comes in. We come to school to learn, school is supposed to be a safe place," Olagbaju said.

Blazers walked out of class at approximately 9:30 a.m. and marched down Colesville road to the Silver Spring Metro Station. From there they took the metro to Union Station where they met up with students from across the county as well as students from D.C. schools, and the group marched to the Capitol. Maryland District 8 representative Jamie Raskin spoke to the students in front of the Capitol. 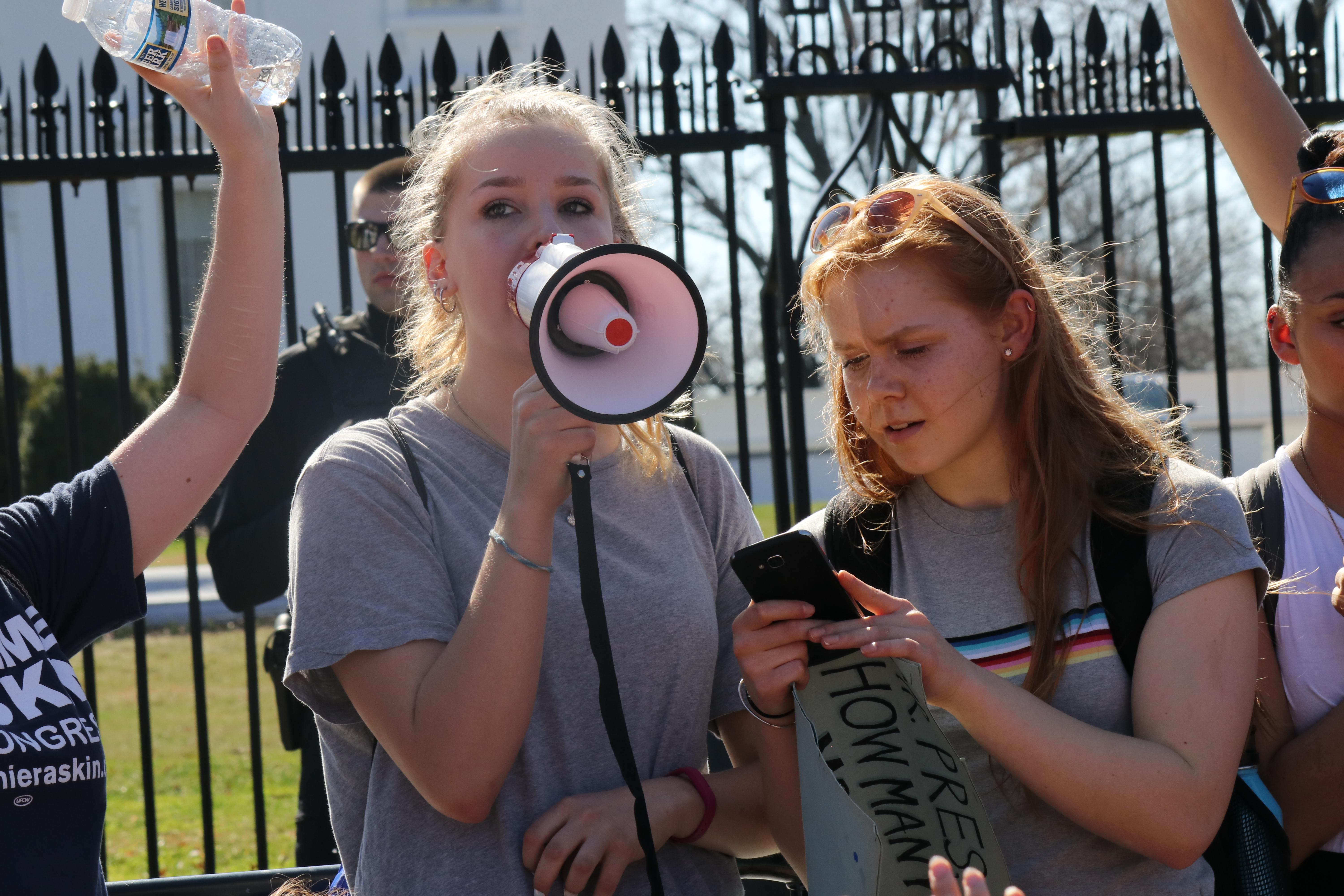 Photo:
Blair freshman Anna Fisher-Lopez hopes the protest will send a message to all lawmakers. "We want to put pressure on people in Congress and people in power to do what we cannot, and pass legislation that will fix these issues. As students most of us can't even vote yet, so the closest way that we can get out and get our voices heard is doing a march like this," Fisher-Lopez said.

Students then marched down the National Mall towards the White House where a moment of silence was held to honor the student lives that were lost to the Parkland shooting. Blair seniors Brenna Levitan, Iyanu Bishop and Emily Fox addressed the group. Students chanted as they gathered in front of the White House to send a message to the president. Gelillo closed the protest by encouraging students to continue to take action for increased gun control legislation. 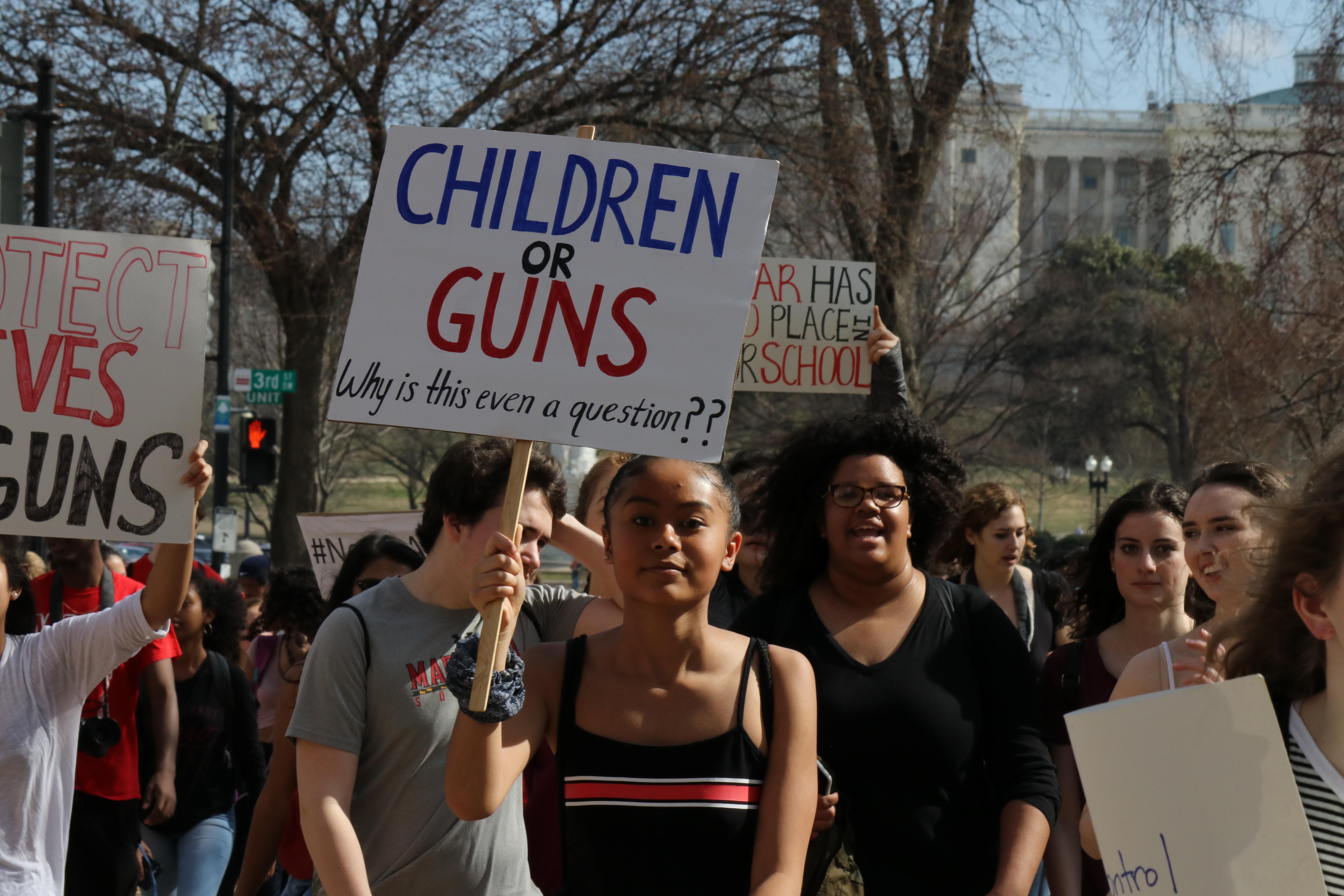 Photo:
"This can't keep happening," Blair freshman Emilie Vigliotta stated. "Children all across the country are scared to go to school because they think that they might get shot. Kids should feel safe, they should feel able to learn, parents shouldn't be scared to send their kids off to school..." Vigliotta said.

Wootton High School Senior Maddie Miller said that she marched today out of frustration about the government's lack of action on this issue. "School shootings keep occuring and no legislation has been passed to fix this problem. I'm scared at school that something is going to happen - I don't wanna be scared and I don't want anyone else to feel scared," she said. But Miller also feels hopeful for the future. "We are the generation that's gonna be able to make a change because we are the generation that is going to be voting next," Miller said. 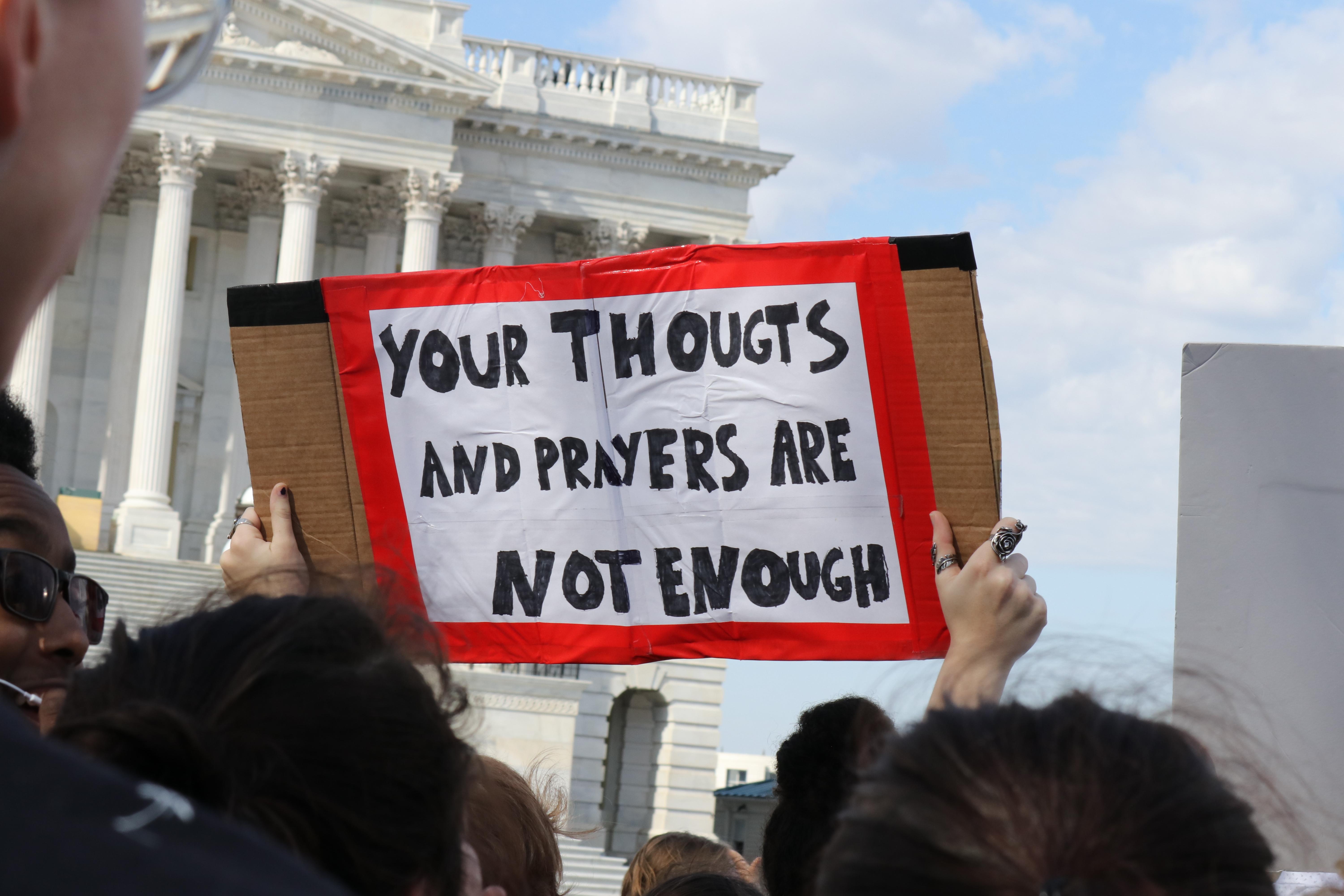 Photo:
Jenny McIntyre, a student at Walter Johnson High School, said that she is marching because school shootings like the recent tragedy in Parkland, Florida have been too frequent. "This has happened far too many times and we need to do something about it," McIntyre said.

Blair freshman Kiran Glass agreed. "It's so easy for anyone to purchase a firearm without any background checks or restrictions, and that has had so much damage and it's time for it to stop," she said.

Blair senior Stephanie Montes De Oca explained her frustration about the lack of change in gun legislation. "It's really saddening that they haven't taken any action towards gun control even though there's been so many instances within this past year," she said. Montes De Oca wants to use this protest to inspire others about the cause. "It's just good to know we can do something to get our voices heard. Hopefully this is inspiring others to protest for what they believe in too," she said. 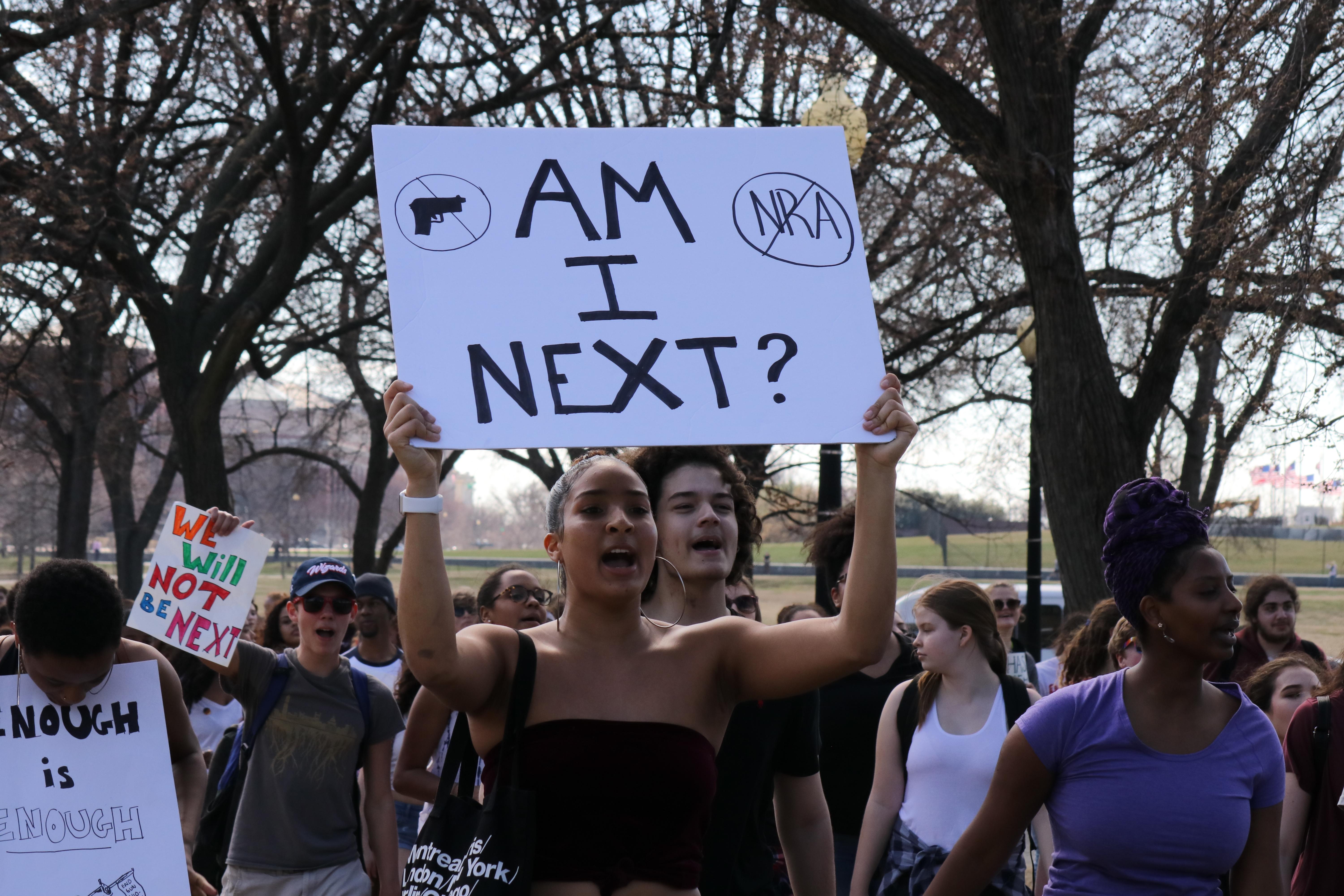 Photo:
Blazers agree that the protest was a continuation of resistance, and action will continue to be taken in order to make a change. "This protest shouldn't just be the beginning, this should not be the last. More should go on so that more can be done in our communities and our school systems," Blair senior Xavier Moses said.

"I can't expect one protest to lead to direct gun regulations, but I think just raising awareness to show that students from all around the country, not just Florida, are upset about this gun violence, and inspiring our representatives to act is a good first step," said Olagbaju. 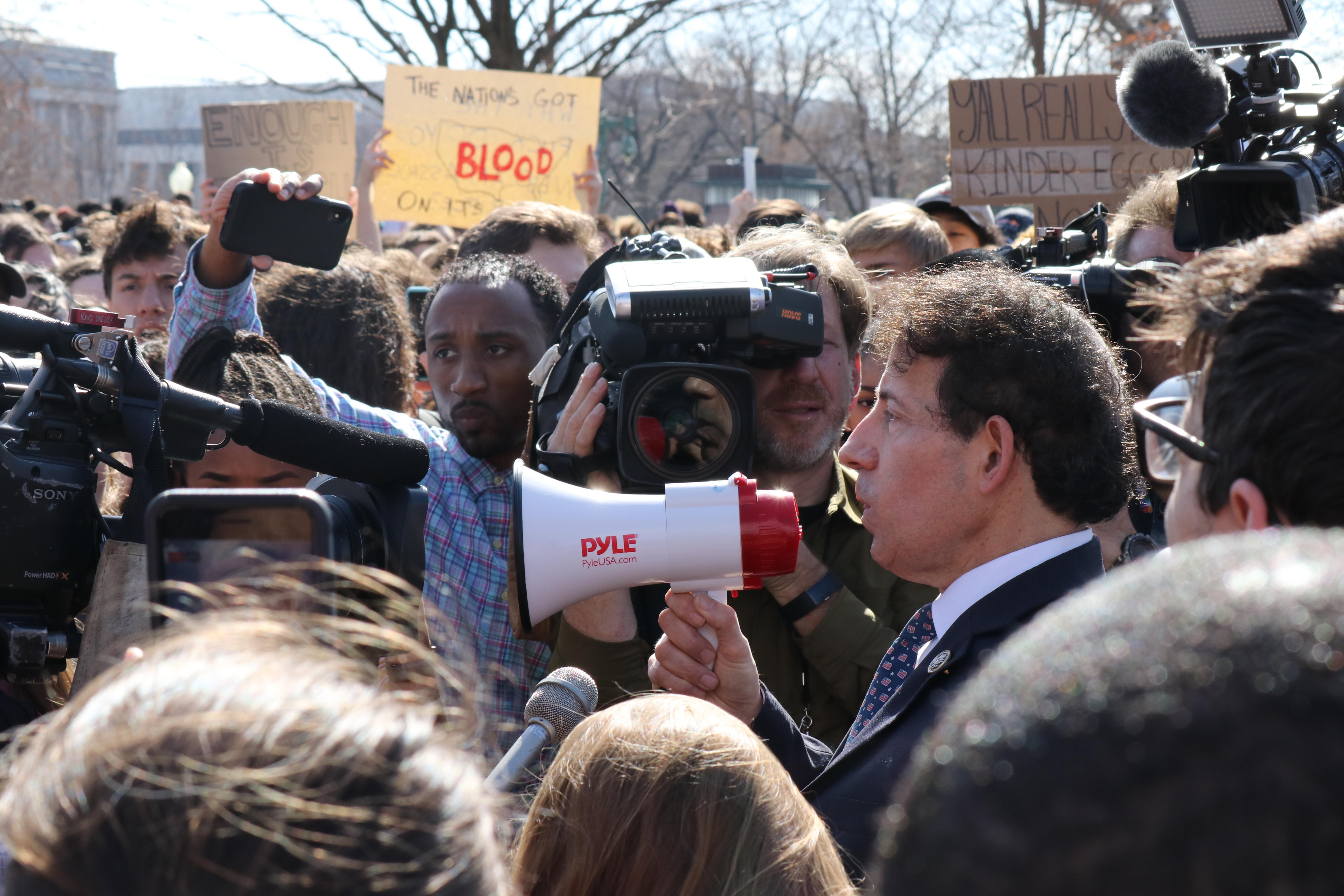 Photo:
For Blazers, walking out of school was about making a sacrifice to show dedication to the issue. "Kids, they're not just walking out because they want to miss school, they are actually making a great sacrifice. High school is super hard, so when you skip class, when you put yourself out there during school hours, it means so much more than if you go on the weekend," explained Medina-Tayac.

While students missed classroom instruction, they were still learning in other ways. "I feel like stepping out of class shows that although we are going to be learning in classes, we're learning more by being here and listening to our representatives and listening to our fellow students," said Olagbaju. "I think at this time [school] might not even be a safer place because guns aren't regulated," she added.