Blair’s most successful teams in years leads the Blazers to a record of 9-2 and 2nd in the region.

Blair’s varsity football team showcased a stellar season, finishing 2nd in the region and solidifying their reputation as a team to watch out for. With one of the most talented squads in Blair history, it was not surprising to see the Blazers take down team after team and finish with a record of 9-2. Stand-out players such as three star senior quarterback Kendell Anderson and all-county elected players like senior wide receiver Aven Williams, senior defensive/running back Kam Reynolds and junior strong safety Mikhail Seiken, made this team one of Blair’s most successful in years. Let’s take a look at the Blazers’ 2022 season.

The first few games of the season went better than expected for the Blazers. Just in the first three matches, the team displayed a level of chemistry superior to previous years. Head coach Samuel Nosoff attributed this to the fact that many of the starters this year played with each other previously and had already bonded. “We had a lot of second year starters…the maturity of this group gave us the ability to add new things so once we got to week two - which was Einstein - we’re not finding out what works, we’re already onto the true game planning and installing [new plays],” Nosoff said.

This advanced chemistry allowed Blair to string together impressive wins against Magruder, Einstein and Northwood with a combined score of 107-20. The most notable of these wins was the infamous “Battle of the Boulevard,” in which Blair and Northwood duked it out for the title of the better team on University Boulevard. Though many anticipated the win, few understood until later that the game foreshadowed the Blazers’ dominance throughout the season after a 45-0 blowout win. 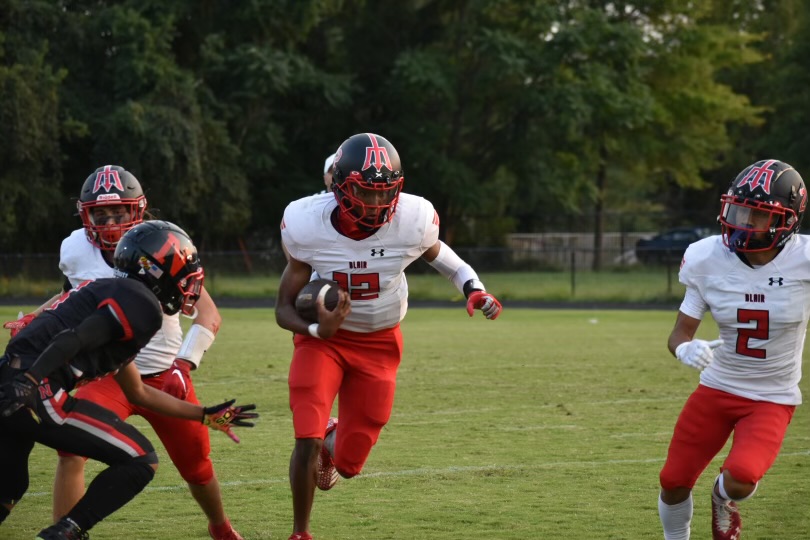 Senior quarterback Kendell Anderson runs through Northwood’s defense in the “Battle of the Boulevard.”

Photo: Senior quarterback Kendell Anderson runs through Northwood’s defense in the “Battle of the Boulevard.”

Senior quarterback Kendell Anderson runs through Northwood’s defense in the “Battle of the Boulevard.” Photo courtesy of Jose Ortellado.

The opening games of the season boosted the Blazers’ confidence, but there were still difficult opponents to play in the upcoming games. While it was important to celebrate the wins, it was also critical to focus on the next games.

Fortunately for Blair, their momentum after three consecutive wins in the first weeks carried over to their following games against tougher opponents. Among these was Paint Branch, which Blair had only narrowly beat once in the past decade. Despite the odds stacked against them, Blair won 25-18 after a nail-bitingly close game that came down to a clutch touchdown by Reynolds in the last quarter.

According to Nosoff, one of the key components that helped defeat Paint Branch was Blair’s offensive athleticism. “Kam’s ability to run was a huge highlight for us. Aven’s first play of the game - catch and [then] he gets hit by the safety right after - holding on to the ball there changed some momentum right from the start,” he said. 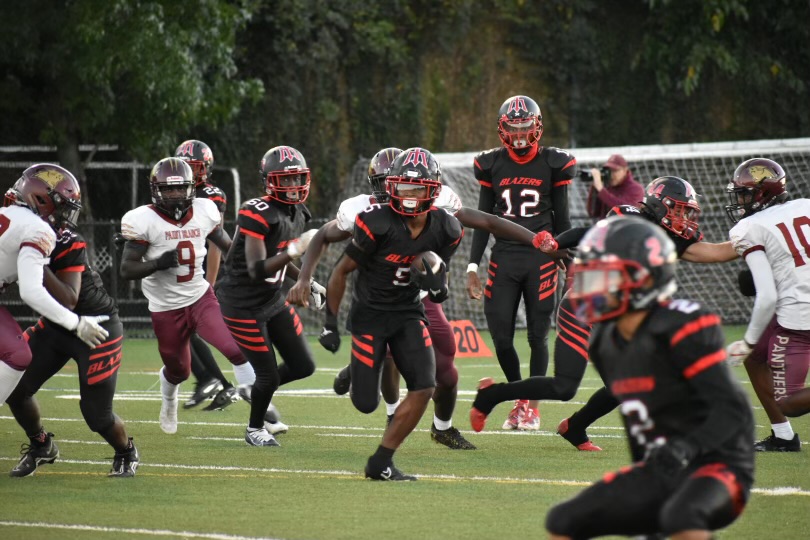 After such an exciting game, Anderson explained how the electricity and excitement in the crowd made this particular win his highlight of the season. “The biggest high moment for us was when we beat Paint Branch… I have a video of when I threw a touchdown pass to Aven Williams, and the whole crowd went nuts and it was so loud,” he recalled. The last time Blair defeated Paint Branch was in 2016, making this upset meaningful for not just the football team, but the entire school.

The Blazers continued their hot streak for their next two games against Blake and Rockville, reaching a record of 6-0. However, despite their success, a number of the Blazers faced adversity both on and off the field. Reynolds revealed that one of the challenges players faced was consistently showing up and putting in the effort at practice. “There was a point in time where at least five people were missing practice on one day. It was bad,” he said.

While some Blazers had their ups-and-downs, eventually it came time where the whole team would have to face their biggest challenge yet after Paint Branch: Sherwood.

Similar to Paint Branch, Blair’s past with Sherwood is filled with losses. Despite the Blazers’ best efforts, they came up just one touchdown short in their match-up against Sherwood on Oct. 14, resulting in their first loss of the season and an end to their undefeated streak.

Surprisingly, the largest contribution to the loss against Sherwood was the surplus of talent on Blair’s team. Nosoff stated that with so many talented players, it was difficult deciding how to run the ball, and who to give it to. “The biggest challenge for us is there’s one football. It’s like in the NBA, when you amass these super-teams, there’s only one basketball so who gets the last shot? For us… who gets the ball and how often do they get the ball?” he said.

After their first loss of the season, the Blazers picked their heads up and defeated both Wheaton and Bethesda-Chevy Chase with scores of 41-8 and 49-35, respectively, finishing second in the region and with a record of 8-1.

At this point in the season, the Blazers were playing even better as a team - connecting passes with ease on offense and effectively stopping opponents on defense. Reynolds explained how as the season progressed, each player’s connections with one another strengthened and Blair’s overall level of play improved as a result. “Our team’s chemistry got way better towards the end of the season with all the team bonding,” he said.

Heading into the playoffs, Blair matched up first against Einstein. After previously beating them earlier in the season, Blair easily moved forward in the playoffs after winning with a score of 28-0. However, their next game would be against Wise, one of the top teams in the state and the team that knocked Blair out of the playoffs last year.

Despite giving everything they had - Reynolds weaving through Wise’s defense to score a touchdown and Anderson throwing dimes to wide receivers - the Blazers failed to move forward in the playoffs, bringing the season to an end for all, and football to an end for many seniors. 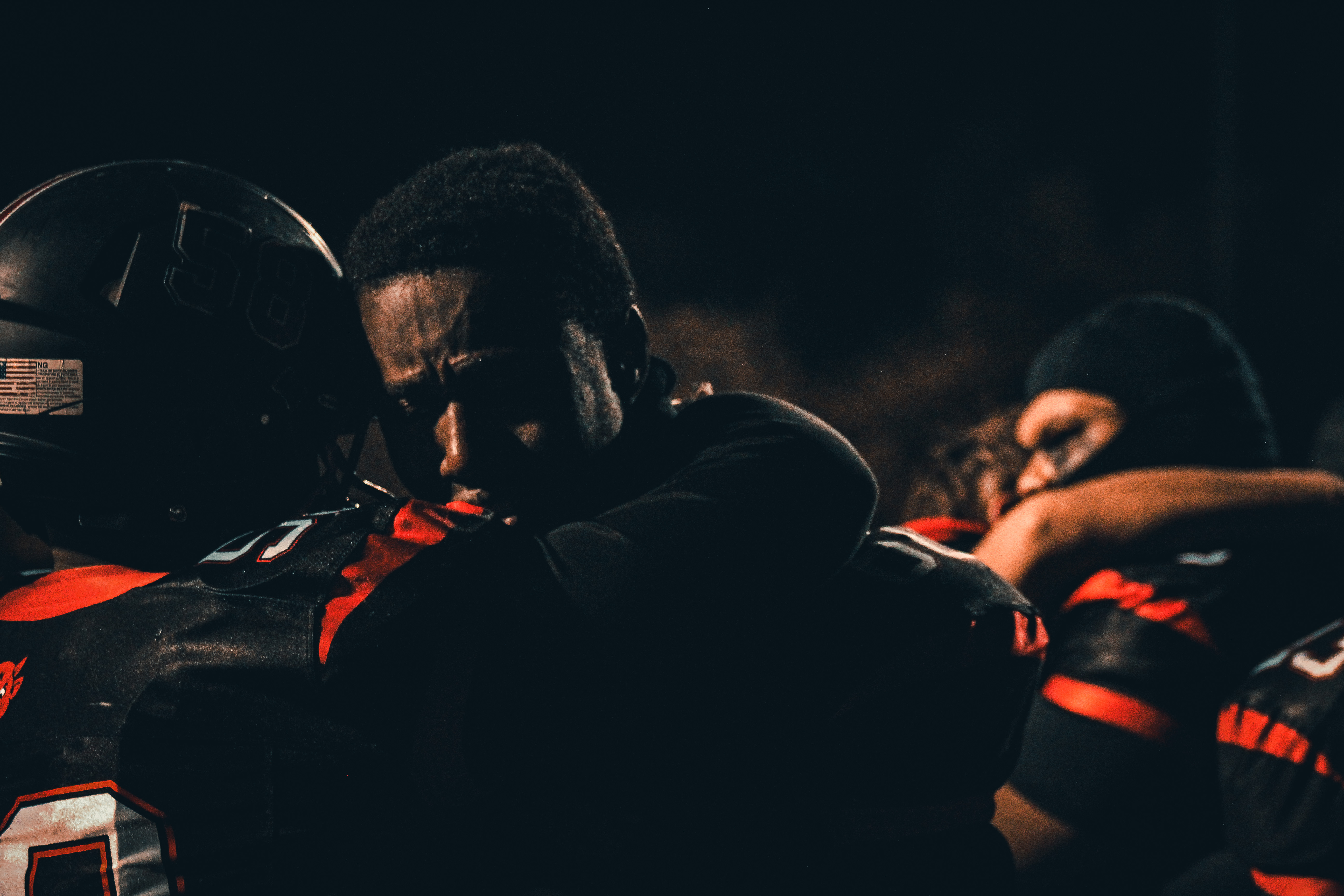 Blazers embrace after an emotional loss against Wise, bringing the season to an end

Photo: Blazers embrace after an emotional loss against Wise, bringing the season to an end

Blazers embrace after an emotional loss against Wise, bringing the season to an end Photo courtesy of Jonas Laufer.

While the final game of the 2022 football season wasn’t what the Blazers hoped for, the season as a whole was one of the most successful in years. Nosoff reflected on this year’s achievements, and summarized them with one word: “Special, special season. 8-1 in the regular season, being on top of our 4A North Division, beating Paint Branch for the first time since 2016, we’re inching closer and closer to the Sherwood upset, and then having the ability to host the two playoff games this year: special,” he concluded.

Anderson recapped his high-school football experience at Blair and described how it’s been a great journey. “It’s been a hell of a ride. I would say it’s had its ups and its downs. But, when it was up, there was nothing like it. When it was down, it taught me lessons, and at the end of the day, that’s all I can ask for,” Anderson said.