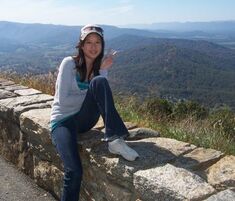 Name: Grace Wang
Position: Staff Writer
Graduation Year: 2011
As a junior in the magnet, Grace somehow manages to fit in time to do things other than stress over the homework load. Besides spending most of her life being Asian by dancing in a Chinese Dance Troupe, she loves to play volleyball (even though she's horrible at it) and sing at ridiculously high intervals. It's not like she can sing anything else.


When sick with a 101-degree fever, you can find Grace at the piano bench, practicing her pieces with a musical passion. Other than that, what piano? She doesn't play piano, contrary to what her piano teacher says.

An enticing smell wafts through the hallway outside of room 365. Loud laughter is heard along with the occasional phrase in a foreign language. Within the classroom, Blazers sit and stand in a lazy circle with delicious moon cakes and crackers melting in their mouths. They make frequent visits to the front of the room for more Asian snacks, play an animal game as an icebreaker between upper and underclassmen and revel in their shared, unique culture.

Michael Durso, 66, was sworn in as the representative for District Five on the Montgomery County Board of Education at a ceremony held today, according to a Montgomery County government press release. Durso was appointed by the BOE to fill the seat vacated by Nancy Navarro, who was elected to the County Council in May.

Director Michael Bay has done it again, connecting action and romance to bring on a film that screams heroic adventures. In the first "Transformers" movie, Sam Witwicky gets involved in the dangerous war between two groups of alien robots. Now, the war continues.