This past week on The Bachelor, Arie, our graying, race-car-driving, dad-bod-rocking Bachelor, kicked off the season by officially becoming Becca K.'s sugar daddy. Their date, which ended up being more like a promotion where Becca K. got to play "model," consisted of Arie giving away hundreds of thousands of dollars of Rachel Zoe dresses, Neil Lane earrings, and Louboutin red bottoms. Some first date. On the topic of over-the-top first dates, Arie then decided that his date with Krystal would be a good time to fly her all the way to Arizona to meet his entire family. 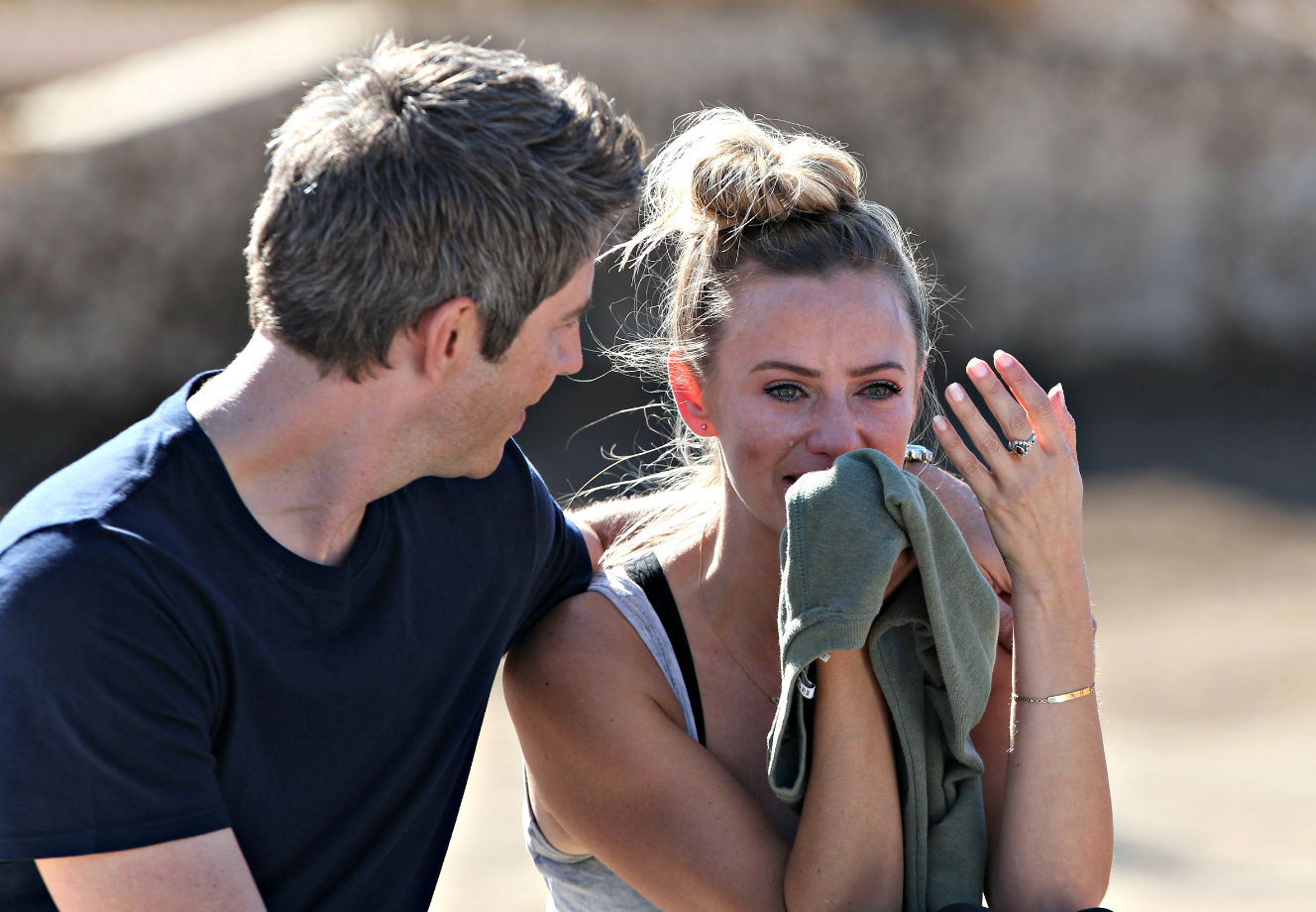 In a complete change of pace, Arie then took 15 girls (much to their dismay) to a Demolition Derby Date. While passive aggressive glances and shady comments are usually how fighting goes down in the Bachelor mansion, this time the girls got to take out their frustrations by smashing cars into one another. Some girls got really into it, like Brittany, who went so hard she ended up concussed. But others, like Anneliese, who claims she had a "traumatic bumper car experience" as a child, were not so enthusiastic. Luckily, Arie was there to comfort Anneliese as she sobbed, "I just remember getting trapped in the middle and everyone just kept hitting me and I was just crying and I hated it!" Sienne won the challenge and the rose, earning her a trophy, some victory milk that Arie made her chug, and a death stare from Chelsea. Her success also won her Arie's attention and a long conversation with him where she revealed that she went to Yale (Why is she here then?), which left Arie reflecting on how he barely graduated high school and worked at Pizza Hut. 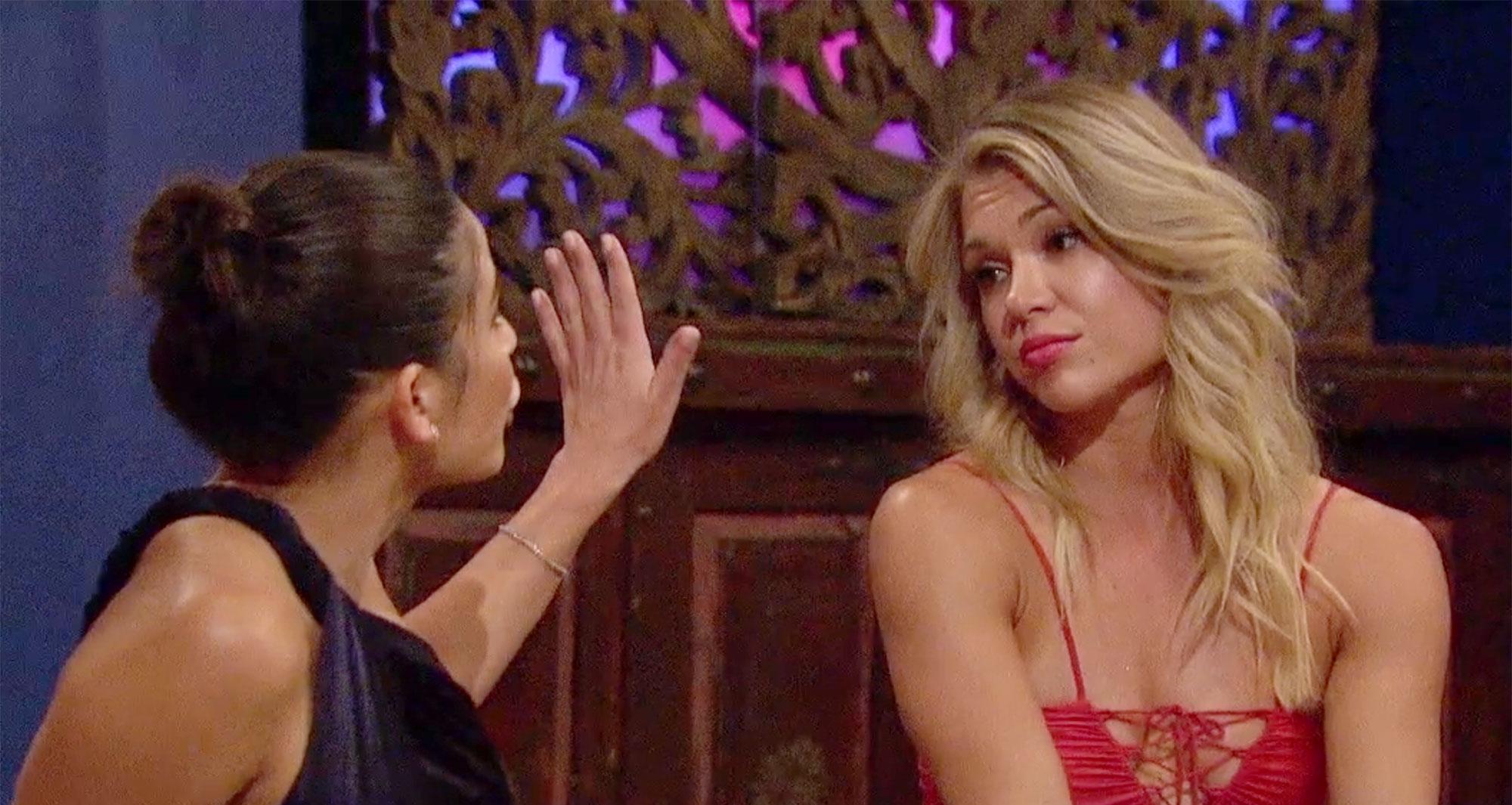 Photo: Bibiana and Krystal face off at the Rose Ceremony.

Bibiana and Krystal face off at the Rose Ceremony. Photo courtesy of People Magazine.

Towards the end of the after party Bibiana lost it when she didn't get time with Arie and wound up screaming at the camera man. She was still simmering with anger by the time the cocktail party rolled around and all it took was crazy Krystal, who already had a rose, stealing time away from girls who did not even get a date this week, much less a rose, to send Bibiana into a tirade against Krystal. At the rose ceremony Arie eliminated Jenny, Lauren G., and Valerie. Jenny, who later told us she's never been dumped in her life, walked out without saying goodbye. Arie followed Jenny to see if she was okay, but he didn't really know what to do, so he just gave her an awkward hug while she stood there, understandably reeling from the fact that Arie chose to keep Kendall, the taxidermist who brought a stuffed seal on to the show, over her.

Check out our predictions for who's going home next week below.

Ashley's lack of one-on-one time with Arie will be the reason for her demise in week three. Not every girl gets chosen for a date, but by not being aggressive at the cocktail party, she ruined her chances. Lauren B. might be Arie's type – pretty and blonde – but not all the Laurens can stay forever. Caroline will be the third to go as she hasn't made herself known, and quiet girls don't last long. Bibiana's fiery personality will keep her around longer, and front runners Bekah and Chelsea will take their bubbling chemistry to the next level.

So far a Lauren has left the show each episode, and I hope this trend continues in week three because I'm having a hard time telling the two blondes apart. Jenna seemed all over the place in the first episode and hasn't really stood out since, so I think Arie might let her go this coming rose ceremony. Ashley has barely spoken, which is never a good sign. I was surprised to see Arie reacted well to Kendall's creepy taxidermy collection this week and any bachelor who is willing to pet a stuffed seal for a girl must want to keep her around for a while.

Although both Krystal and Bibiana don't seem like ideal matches for Arie, the fact that they've both cried and fought with each other within the first two episodes indicates they're the appointed "dramatic ones." If previous seasons have taught us anything, it's that the two most dramatic women clash midseason, leaving one intensely annoying contestant who sticks around. This is inevitable, but you better believe they'll hang on for as long as possible before one emerges victorious.

Ashley didn't get a group date or one-on-one last week and the fact that I barely remembered she's even on the show doesn't reflect well on her potential future with Arie. Next up on the chopping block is Caroline, who seems very sweet (if she actually got any screen time) despite an unfortunate middle-part. And lastly, I have to sadly say Bibiana, because she is just too real for this show. The whole premise of the Bachelor is pretending you're okay with other girls stealing your man and there's no way Bibiana will put up with that. Her animosity with Krystal during this week's cocktail party could easily snowball into a bigger issue next week and result in her elimination. Then again, the Bachelor loves drama so they might keep her around a bit longer just to stir up trouble.

Going into the third week of the Bachelor, a few of the front runners are Bekah M., with her spicy personality, and Chelsea with her natural beauty. Only a fool would think that Bibiana, after her outburst last week, will receive a rose. Caroline has also fallen toward the back of the pack. Arie hasn't gotten to really know her and if chemistry doesn't start to develop soon, she will most likely be eliminated. Lauren S., the Social Media Manager is also likely to be cut, because she ironically isn't outgoing enough...don't expect her to make it far in the season. Finally, a dark horse in the race is definitely Jacqueline as her personality is peppered with humor and class. It wouldn't surprise me if the Research Coordinator dazzles Arie.

The amount of time that Ashley has been able to get with Arie is lackluster at best, and will be the eventual downfall of their relationship. Too many Laurens is definitely going to be too confusing for Arie and will create drama between them, and forcing Arie to pick one: Lauren B. Caroline has been way too shy to show us who she really is. These three women are incredible in their own way, but everyone has to go home at some point.

There are too many Laurens right now, and that's why Lauren S. has got to go. She hasn't made a strong impact on the show so far and she doesn't have a stand out personality like Bibiana that will keep her in the show. Her main trademark is being blonde girl number 14. Lauren S. is a background contestant whose time on the Bachelor is about to be cut short. The next to go will be Brittany T. Brittany went on the demolition derby group date in Week Two, but during the date she had a minor neck injury. The Bachelor franchise is notorious for exaggerating little injuries like this in order to create the illusion of drama, despite little time being spent checking in with Brittany after her "injury." This indicates that Brittany will not make it far and is the next to go. The last to go will be Ashley. I honestly don't know who she is, and I don't care. There are already three real estate agents on the show. There doesn't need to be a third.