Hometowns! One of the most highly anticipated episodes every season. Arie first visits Kendall's family in Los Angeles. Before he is introduced to her living family members, he meets her stuffed ones. Yes, I'm talking about Kendall's extensive taxidermy collection. Arie even stuffs some rats with her, how romantic! Kendall's twin sister, who is, no joke, named Kylie, thoroughly analyzes Arie and tells him that something is missing in his and Kendall's relationship.

Arie then jets off to Weiner, Arkansas, Tia's birthplace. Tia caters to Arie's interests - well, actually his singular interest because he is a one dimensional bump-on-a-log, and plans a racing date for the two of them. Later Arie runs into some trouble with Tia's brother and father. They grill him on the whole "Kissing Bandit" shtick and make it clear that if he pulls any of his "playboy" stuff on Tia they will pull a rifle on him.

In Prior Lake, Minnesota Becca wants to show Arie just how basic she is, so she takes him apple picking. Arie then talks to Becca's Uncle Gary who explains that Becca's father died of cancer and she has been through a lot. As we know, Arie is really bad at having conversations where he can't just respond to everything with some mundane line like "Your daughter is amazing." He manages to blubber his way through the ordeal. 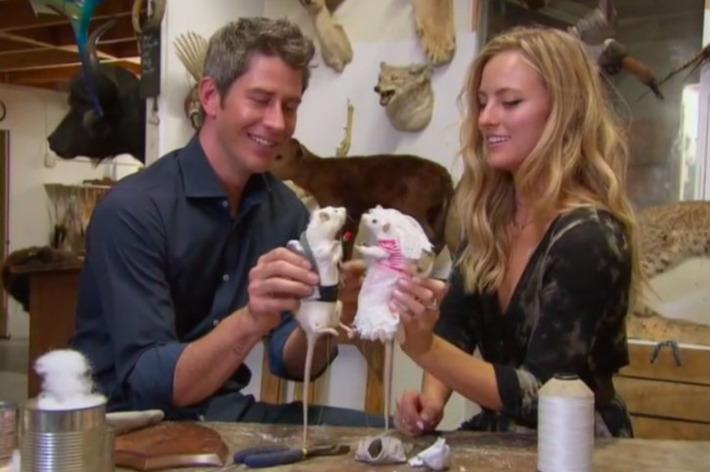 Photo: Arie and Kendall stuff taxidermy rat versions of themselves and pretend to make the rats kiss.​

Photo: Arie and Kendall stuff taxidermy rat versions of themselves and pretend to make the rats kiss.​ Photo courtesy of ABC.

Next is Lauren's hometown in Virginia Beach. Lauren's dad, a former member of the military, acts really tough at first, bluntly telling Arie all the reasons he doesn't approve of him. However, his opinion of Arie does a full 180 when Arie "casually" mentions that he did a goodwill tour of Iraq one time. Lauren's mom is not so easily bought. As Arie spews more generic crap about how Lauren makes him feel, Lauren's mom challenges him and asks if he's saying all this stuff to the other families too. (The answer, of course, is yes). Also, on this visit it is revealed that she's already been engaged TWICE. And she's only twenty-five? Hm.

At the rose ceremony Arie pulls Kendall aside before making his choices. He asks her if she's ready for an engagement, and she tells him that she's not. It seems obvious to send her home, but then Arie pulls a fast one on literally all of America and picks Kendall over Tia. Tia, who was ready to leave Weiner, Arkansas forever, never look back, and follow Arie to whatever boring suburb he lives in! Poor, sweet Tia thinks it's something she did wrong even though it's really just that Arie has lost most of his brain cells from getting knocked around while racing. He probably can't even spell Arkansas.

Kendall didn't leave last week, but this is the week she will get sent home. Even though she's nice and funny, I think deep down Arie is still a little creeped out by the taxidermy thing. I mean, who wouldn't be? I just can't see the two of them sitting at the kitchen table stuffing bunnies
in 40 years, and neither can Arie. He likes to play it safe, which is why he deserves a shy, boring girl like Lauren who will smile and nod to whatever he says.

As the season winds down to a close, it is of the utmost importance to follow the coveted bachelor handbook in order to accurately predict who will be sent home. Rule number 12 states that, "If you are not ready for the ring, then it's just a temporary fling." This directly applies to Kendall. After she admitted that she's not quite ready to settle down, anyone with a keen and observant eye could see Arie's soft brown eyes turn steely cold. The bachelor is looking for a wife, not a girlfriend or hook-up buddy. Arie has no choice but to send Kendall packing...

The only logical scenario for this week is sending Kendall home. She admitted she wasn't ready to be engaged and made him stuff dead rats at hometowns. Lauren and Becca, on the other hand, are ready to pack their bags for Scottsdale and jump into a life with Arie. The fact that Arie had to pull Kendall aside to see whether she was worth keeping another week shows he has doubts and will most likely be saying goodbye to her this week.

Kendall should have gone home last week after she brought Arie to her creepy taxidermy craft barn. Both Lauren B. and Becca have developed much stronger relationships with Arie and it would be crazy for him to send either of them home in favor of Kendall.

While I love Kendall's quirkiness, I think that it's her time to go. Becca is clearly not going home. She has the strongest connection with Arie out of all of the three girls. Lauren B. and Arie's personalities are very similar: they are both extremely boring so they're perfect for each other. Also, I just don't see Arie ending up with a girl who does taxidermy for a living.

It's finally the taxidermist's time to go home. She had such an unusual date with Arie last week, teaching him how to do taxidermy by stuffing rats. At the rose ceremony, Arie pulled her aside and asked her if she was actually ready to marry, and she basically said no. Arie was a complete idiot for sending Tia home and he doesn't deserve any of the remaining women. He said he was falling "deeply in love" with Lauren B. and for that reason he will keep her around. Becca and Arie's hometown went better than he thought and they are clearly so meant for each other. Kendall is once again the odd woman out in this scenario and will be sent home.