Blair students met up with peers from all over DMV to protest in honor of the one month anniversary of the Marjory Stoneman Douglas shooting in Washington, DC

The walkout was organized by MoCo Students for Gun Control, a county-wide movement dedicated to pushing for improved gun control legislation on the local, state, and federal levels of government, according to their press release. It was arranged as part of a larger national movement organized by EMPOWER, the youth branch of the Women's March organization.

Blair students walked out of school at approximately 8:15 a.m. and marched down Colesville road to Silver Spring Metro Station accompanied by police escorts. Taking the red line to Farragut North, Blair students, along with hundreds of of other Montgomery Country and D.C., Maryland and Virginia (DMV) students, gathered in front of the White House. At 10 a.m., they sat down and remained silent for 17 minutes, one minute for each victim of the Parkland Florida Shooting. "Standing in silence is a way of remembering the people whose lives were taken in the shooting, and I know a lot of people say that 17 minutes of staying silence can't do much, but it's really just symbolic to remember the victims," Northwood freshman Paula said. 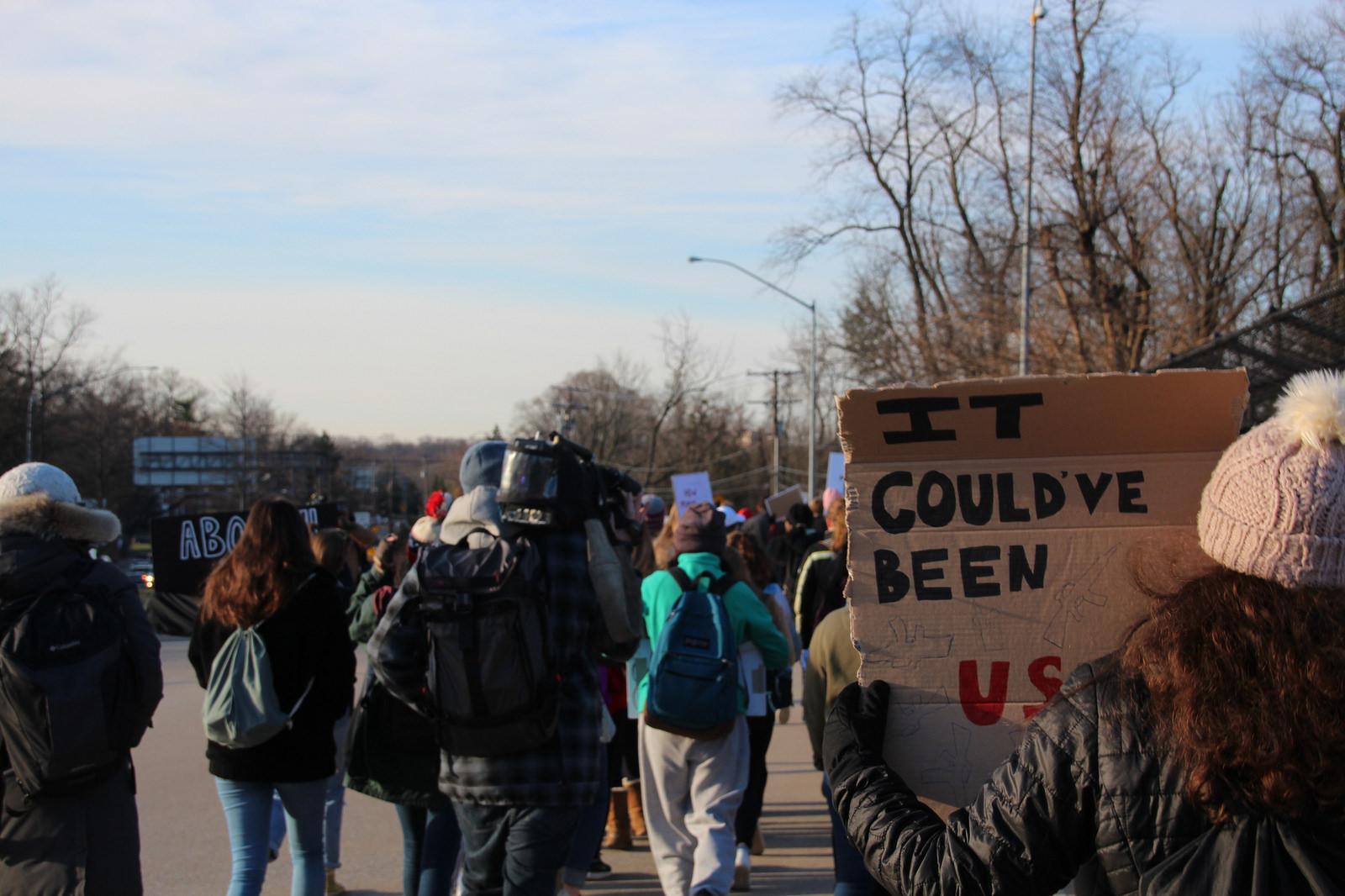 Notably, Sen. Bernie Sanders (D-Vt) stopped by unexpectedly to addressed the crowd as well. "All across the country people are sick and tired of gun violence, and the time is now," he said.

Rep. Nancy Pelosi talked about the power of student voices. "Students of America, you are creating a drumbeat across America. A drumbeat that will echo until we get the job done," she said. "No one's political survival is more important than the survival of our children."

The speakers emphasized intolerance of the National Rifle Association (NRA), and the need to persist in student activism. "I say over and over again, when you see something that is not right, not fair, not just, you have a moral obligation to stand up, and say something and do something. Thank you for doing something," Rep. John Lewis said.

Closing out the day, Levitan-Garr addressed the students one last time, reminding them to keep pushing for legislation and to keep marching. However, she explained that when organizing the march, the enthusiasm she saw from her peers left her confident that they would continue to fight for common sense gun laws. "It wasn't super hard for us to get students out here which I think speaks a lot to the community that we live in. We're super politically active, Montgomery County especially and we have to use our voices for those who can't," Levitan-Garr said.

This rally comes in response of the Parkland, Florida mass shooting, as well of the many other school shootings that have happened since Columbine in 1999. In the wake of the initial protest by DMV students on Feb. 21, some politicians have offered a variety of solutions that do not include gun legislation, such as arming teachers. "I think that arming the teachers definitely isn't a good idea. I feel like if something wrong happens, they're all just going to be violent about it and I feel like that's not a good thing. So, giving teachers guns isn't the best option," Walt Whitman High School freshman Gabe Thomas said.

Demonstrators emphasized the importance of voting throughout the rally. Though many students are unable to vote, most of them will become eligible in the next few years. In the meantime, students are taking to the streets to make their voices heard. "I'd like to think that marches bring more attention to the issue, both to representatives and others. I'd imagine that many of them aren't affected by these shootings until we stop traffic," Blair junior Stuart Schulken said. 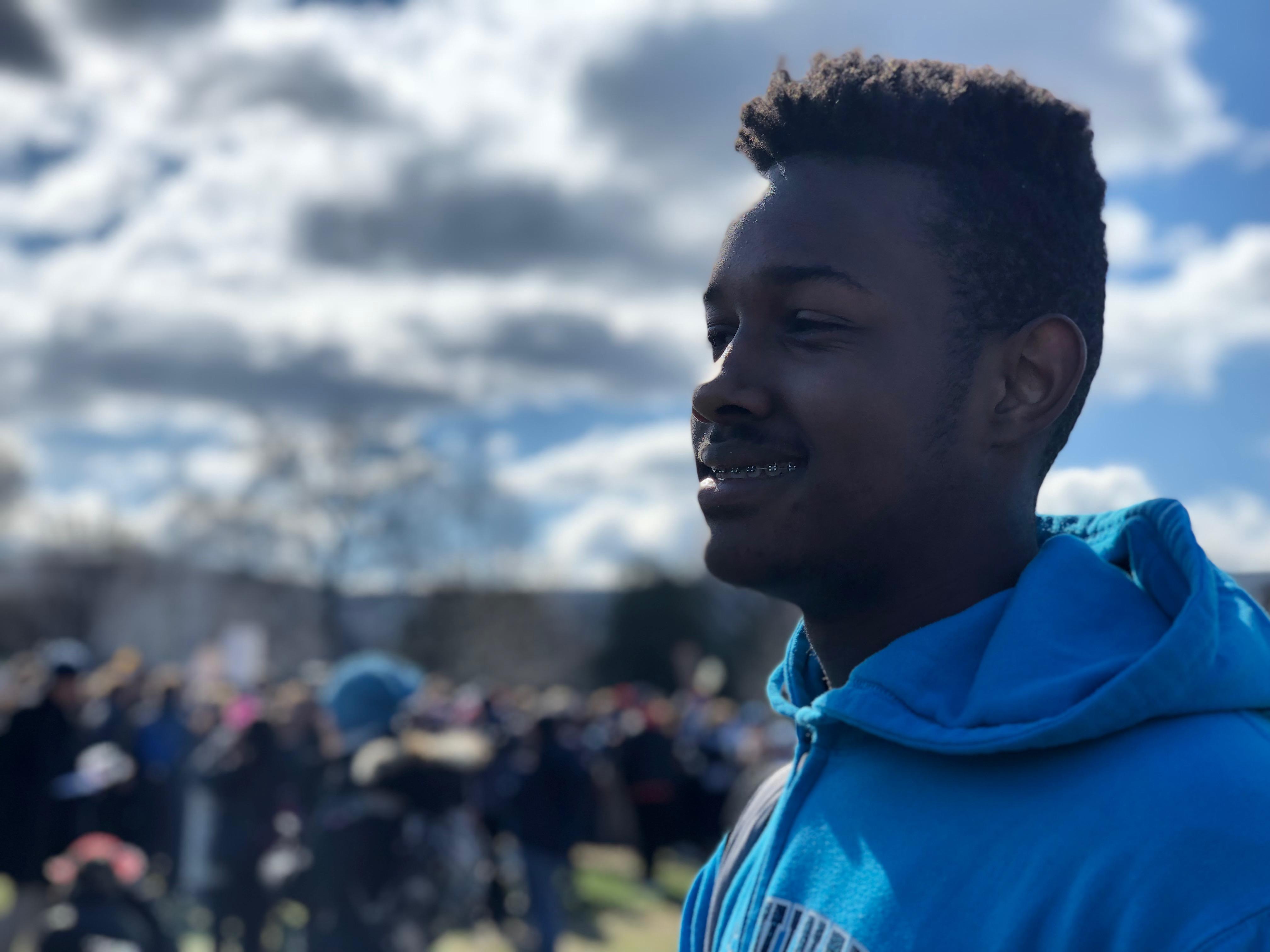 Student protesters and congresspeople alike were upset with the inability of Congress to pass national comprehensive gun reform laws. "I marched today because I feel the inaction from our representatives is morally corrupt and shameful. I'd like to see action," Williams said. The protesters widely agreed on the actions that need to be taken. "I think we need the banning of assault rifles. We need to make the process that you have to go through to get a gun way harder and more tedious," Blair Freshman Class President Che Moorhead said.

Students also emphasized the U.S.'s poor rankings in terms of gun violence and mass shootings compared to other developed countries, and wondered why the United States is struggling to pass effective laws. "I'm not exactly sure what bipartisan gun control looks like because I think that if it were this obvious, we would have done what Australia did in what I think it was 1999, and they never had another incident," Moorhead said. The Australian legislation that Moorhead referenced was enacted after the Port Arthur shooting and aimed to ban all automatic weapons as well as included a gun buyback program.

As a student organized event, the MoCo Students for Gun Control leaders struggled to balance the focus between encouraging student led activism and having adults support the students. "It was really hard to balance student organization versus adult organization because we need to be taken seriously and this is a student organized event and I think a lot of adults wanted to help us but didn't exactly know how to," Richard Montgomery High School senior and MoCo Student for Gun Control representative Rosie Silvers from said.

The coordinators recognized that they faced some unexpected challenges but ultimately felt that the difficulties did not detract from the goal of the walkout. "We accomplished so much obviously there were hitches and there were bumps but we pulled off something huge today," Silvers remarked.

Many marchers felt the power of the event as well and were proud to be a part of the national conversation. For sophomore Anja Cvitanovic of Richard Montgomery, this protest showed how students would not let the fight for gun control die down as it had after previous shootings. "I feel like the movement is finally catching and that there is a lot of momentum here. Even though people say that after every shooting, I think that this one is different because we are actually coming out and changing things with the power of our voices," Cvitanovic said.

Walking out of school was both empowering for students and a learning experience. "Student activism is learning how to be a citizen and learning how to be engaged and understanding what your governments is doing and making sure it's supporting you and keeping you safe," Senior Anna Goodman from Sandy Spring Friends School said.